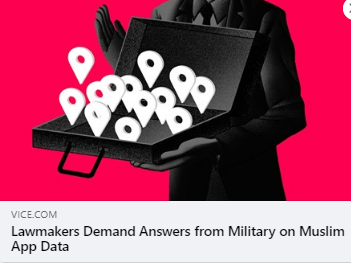 “CAIR thanks Representatives Pocan, Tlaib, Omar, Carson and the other lawmakers who are working hard to defend the civil rights of American Muslims by rejecting government surveillance and seeking answers from the Biden Administration about whether it will reject such discriminatory abuses of power or inherit ownership of them from the prior administration,” said CAIR Director of Government Affairs Department Robert S. McCaw.

“We cannot begin another administration continuing the systemic surveillance of Muslim communities,” said Congressman Mark Pocan. “The American Muslim community deserves to know why the U.S. military targeted their data and what they did with that data. We cannot simply repeat the mistakes and opacity of the previous administration. The Biden administration has an opportunity to prioritize transparency and the civil liberties of Muslim-Americans after two decades of surveillance and spying by our federal intelligence community, we urge them to do so.”

“President Biden must ensure that the civil rights of all people, including Muslim Americans are protected,” said Congresswoman Rashida Tlaib. “We cannot continue to allow our government to intrude on and violate the privacy and rights of people across this country. We cannot pick and choose who the Constitution applies to. The reports that the United States military purchased data from apps targeting Muslim audiences is beyond troubling. We need answers as to why this happened and action to ensure it never happens again.”

“For decades now, the Muslim community in Minnesota and across the country have had their civil liberties compromised, their rights abused, and their privacy ignored,” said Congresswoman Ilhan Omar. “It is unacceptable in a country that promotes the freedom of religion and assembly. The Biden Administration must provide a full explanation for this blatant abuse of power and potential violation of the Constitution and ensure that it does not happen again.”

Click here for a copy of the letter. Copied below is the letter’s text:

Office of the Director of National

We write to express our alarm at recent reporting regarding government purchases of access to large quantities of personal data from apps including a widely-used Muslim prayer and Quran app and a popular Muslim dating app.[1]  This disclosure raises serious concern that such information is advancing systematic, warrantless surveillance of the Muslim-American community contrary to the privacy protections guaranteed in the U.S. Constitution. We wish to know more about these data purchases, the use of information gleaned from the data, and any possible violation of privacy rights granted by the Constitution and protected by law.  Specifically, we request answers to the following questions. Please provide separate responses for each military and intelligence community agency:

1)            Has any warrantless surveillance occurred on any U.S. citizen using purchased location data?

2)            Has any surveillance whatsoever occurred on any U.S. citizen using purchased location data?

3)            Did X-Mode or any other location data provider tout access to location data of Muslims as a feature of its service in communications with U.S. military or intelligence community agencies?

4)            Were apps used primarily by the Muslim community targeted for data purchases?  If so, which apps specifically?

6)            Have agencies purchased information or data (or access to information or data) that would otherwise be unavailable to the American military, American intelligence community, or American law enforcement agencies?  If so, specifically what type of information/data, and how many individuals were possibly included in the data/information?

7)            Do the U.S. military or intelligence community agencies currently possess location data of American citizens, including Muslim-Americans?  If so, which agencies, and how was this data obtained?

8)            What was the cost of each contract the military has executed for the purchase of location data?

10)          Has evidence been used in any court application, trial, hearing, or other proceeding that consists of, was obtained from, or was derived from location information purchased from a commercial vendor?

11)          What are the circumstances under which the government notifies criminal defendants, or other parties in legal proceedings, of the use of evidence that consists of, was obtained from, or was derived from location information purchased from a commercial vendor?

12)          For any purchased location data, are – or were – the military and intelligence community agencies aware of what apps generated such data prior to purchasing? Please describe each agency’s awareness of the source of the data.

13)          If the military or intelligence community has engaged in any data purchasing that targeted Muslim-Americans or Muslims generally, has similar targeted purchasing occurred with respect to any other ethnic or religious minority?

Thank you for your attention to this important matter.  It is imperative that every American citizen, no matter their ethnicity or religion, is certain their Fourth and First Amendment rights are not only protected, but equally enforced.