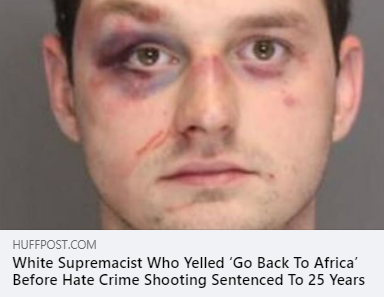 (BALTIMORE, Md., 9/24/2020) —  The Maryland office of the Council on American-Islamic Relations (CAIR) today welcomed the sentencing of a white supremacist Brandon Higgs to 25 years behind bars with five years probation due to a hate crime shooting motivated by racial animus.

A scuffle ensued in which Smith tried to defend himself and Higgs attempted to shoot him. Robert Peete, Smith’s friend, was also there and reported that Higgs pointed the gun in his face. Higgs shot the gun into Smith’s leg, obliterating his tibia. The two friends managed to restrain Higgs until the police came.

As Higgs awaited trial, many comments he had made in private neo-nazi group chats were uncovered, including ones with plans to attend the “Unite the Right” white supremacist rally in Charlottesville, Virginia. Higgs also had an obsession with Dylann Roof, the white supremacist who in 2015 massacred Black worshippers at a church in Charleston, South Carolina.

On Wednesday, a Maryland judge sentenced Higgs to four decades behind bars on charges of shooting and injuring Smith. The 26-year-old former Navy cryptologist was found to be guilty of first-degree assault, attempted voluntary manslaughter, hate crimes and related firearms charges. Fifteen years of the sentencing were suspended.