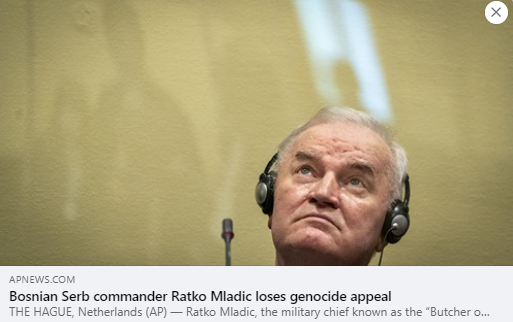 (WASHINGTON D.C., 6/8/2021) – The Council on American-Islamic Relations, the nation’s largest Muslim civil rights and advocacy organization, today welcomed the decision of a U.N. court to uphold its war crimes, crimes against humanity and genocide convictions of Ratko Mladic, former commander of Bosnian Serb forces during the 1992-95 Bosnian war.

Mladic was responsible for atrocities committed throughout Bosnia, which led to the deaths of some 100,000 Muslim Bosniaks. He orchestrated the worst single act of genocide in Europe after World War II, the 1995 Srebrenica massacre, in which over 8,300 Bosniak men and boys were killed. He also led campaigns of ethnic cleansing against Bosniaks and the 44-month siege of Bosnia’s capital Sarajevo that led to deaths of 5,434 civilians.

Mladic appealed his convictions in August 2021. On Tuesday, the U.N. court rejected his appeals 4-1, upholding his life sentence.

“We welcome the court’s decision to uphold Mladic’s convictions,” CAIR Government Affairs Department Director Robert McCaw said. “We hope that this decision conveys to the world that perpetrators of such heinous atrocities cannot escape accountability. We pray that God grants justice to all the victims of the Bosnian Genocide.”

He also noted that perpetrator of the Christchurch massacre that killed dozens of Muslims in New Zealand and Anders Breivik, Norwegian white supremacist who killed 77 in Norway both cited Bosnian Serb leaders as inspirations.