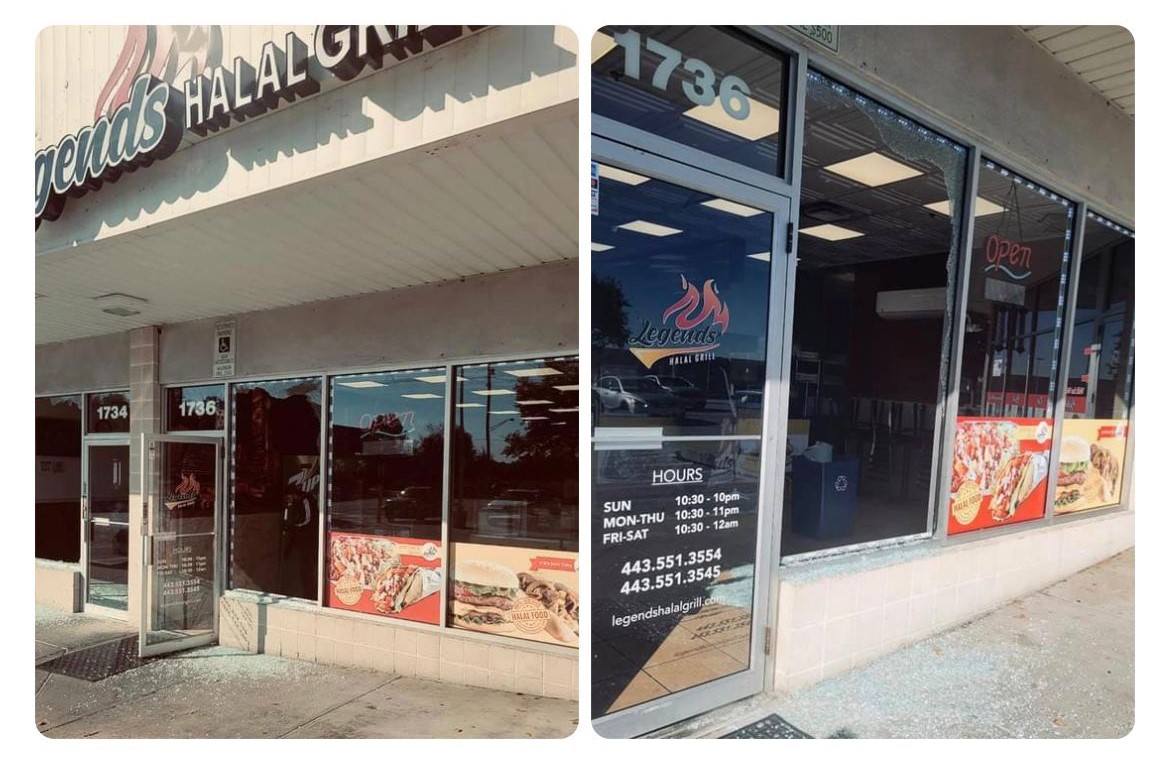 Civil rights group says there is no evidence of a bias motivation, but local halal restaurants should exercise caution after at least three burglaries reported in recent weeks

(BALTIMORE, MD, 11/9/2021) – The Maryland office of the Council on American-Islamic Relations, the nation’s largest Muslim civil rights and advocacy organization, today encouraged Muslim-owned businesses in the Greater Baltimore region to be vigilant and assess their security after at least three halal restaurants in the area have been targeted in breaking-and-entering incidents in recent weeks.

[NOTE: “Halal” is the Arabic word for foods allowed under Islamic dietary laws, which are similar to kosher rules for the Jewish community.]

Legends Halal Shack on Rolling Road, Mazza Kabob Afghan Grill on Baltimore National Pike and Champs Pizza & Wings on Reisterstown Road were all reportedly broken into after closing. Video surveillance footage in at least two cases shows masked burglars rummaging around before making off with a safe containing an undisclosed amount of money.

In one case, the restaurant owner reported to CAIR their establishment was broken into three times. There does not appear to be any indication of a hate bias motive in any of the incidents at this time. No suspects have been arrested or charged.

“Small businesses form the backbone of our state’s economy,” said CAIR’s Maryland Director Zainab Chaudry. “They represent the livelihood of entrepreneurs who work hard to provide for their families and give back to their community, and they deserve our support. We urge anyone with information about these disturbing crimes to contact law enforcement authorities.”

Chaudry noted that the management of Legends’ Halal Shack posted a public announcement encouraging those behind the break-in at their restaurant to come in and complete a job application. Their message reads in part: “There are better opportunities out there than this path you have chosen.”

She said Washington, D.C., -based CAIR is urging Muslim small business owners in the Greater Baltimore region to use its booklet on “Best Practices for Mosque and Community Safety” to conduct a risk assessment, create and/or review security and emergency plans, secure money and high value goods, and install and/or test alarms and video surveillance equipment.

The Best Practices for Mosque and Community Safety booklet may be viewed at: https://www.cair.com/mosque-and-community-safety/

Chaudry said CAIR is in touch with the Baltimore County Police Department which offers free security surveys at no charge for businesses to identify vulnerabilities. To schedule a security survey, business owners can email mdoutreach@cair.com for more information.

Anyone with information about the incidents is encouraged to submit a tip through the Baltimore County Police Department’s iWatch website or by calling Metro Crime Stoppers at 1-866-7LOCKUP.