Repealing the Muslim Ban is Necessary But Not Sufficient 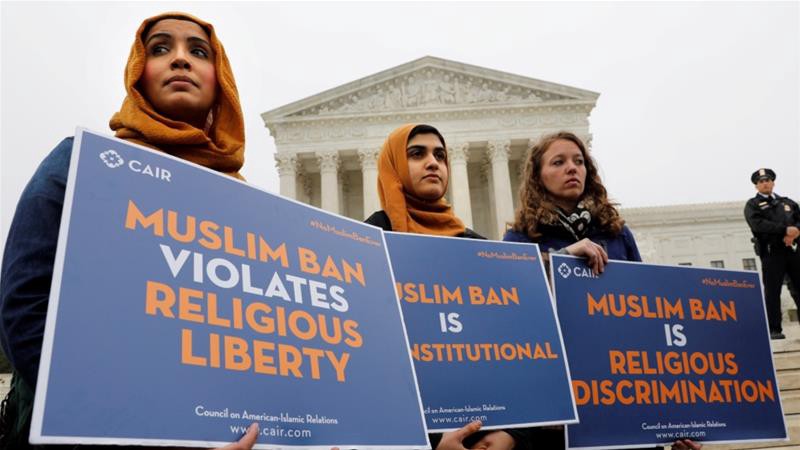 In a speech to American Muslim voters last week, Joe Biden publicly promised that he would overturn President Trump’s Muslim Ban on the very first day of his presidency.

“I will end the Muslim Ban on day one,” Biden said at the Million Muslim Voters Summit, an online event hosted by the American Muslim political group Emgage Action. “Day one.”

As the leader of our nation’s largest Muslim civil rights organization, I spoke at the event in a nonpartisan capacity to share information about major civil rights issues impacting American Muslims.

As I noted, overturning the Muslim Ban would be a welcome step. Whether President Trump eventually ends the ban himself, whether Congress forces him to do so by attaching repeal legislation to a bill he feels obligated to sign, or whether a newly elected President overturns the policy, the Ban should and must go.

However, ending the Muslim Ban is not sufficient to address the concerns of Muslim Americans. In fact, repeal is one of the easiest concessions that any president could make to our community.

Families have been ripped apart. Students have been deprived of educational opportunities. Talented workers have lost out on jobs. Refugees have been trapped in dangerous conditions. And our Constitution has been tainted with another bigoted policy approved by the Supreme Court, thus endangering the rights of everyone in our nation.

Repealing such a widely-condemned and blatantly unnecessary anti-Muslim policy should be easy for any president to do. What’s harder, but just as important, for a president to do is end the systemic anti-Muslim bigotry that has calcified in our government over the past twenty years.

Starting under the Bush Administration, the national security state exponentially grew in ways that continue to harm Muslim Americans without nearly as much public notice or condemnation as the Muslim Ban.

For example, President Bush expanded the powers of the National Security Agency and other federal agencies that disproportionately target Muslims, both citizens and immigrants alike. Those agencies continue to overreach today.

He opened the Guantanamo Bay detention camp, locking away hundreds of prisoners without charge or trial — including people later proven to be civilians. The Guantanamo Bay camp remains open today.

He expanded Orwellian government watch lists that subject Muslims in particular to mass surveillance, often interfering with our ability to open bank accounts, win jobs and travel. Those watch lists exist today with an even longer list of (often Arabic) names.

The Bush administration also oversaw flawed criminal prosecutions that targeted and smeared mainstream Muslim American leaders and organizations, including the civil rights group that I founded. Those smears continue to haunt our community today.

Although the Obama administration changed course in many positive ways, such as explicitly banning the use of torture, many other injustices persisted.

For example, the administration engaged in the bulk collection of private data from Americans without a warrant, launched drone strikes that killed hundreds of innocent people overseas, vacillated between supporting democrats and dictators amid the Arab Spring, failed to close Guantanamo Bay, and established the Countering Violent Extremism (CVE) program, among other harmful policies that have continued — or become worse — during the Trump Administration.

Finally, it is important to note that the issues which pose a particular to threat Black Americans — -such as racial profiling, police brutality, the militarization of law enforcement, and a failure to hold officers accountable for deadly shootings of unarmed people of color — are inherently American Muslim issues. And these problems, too, persist today.

Of course, the broader Muslim community has experienced a wave of humanitarian crises that American foreign policy has either enabled or failed to adequately address, including ethnic cleansing in Myanmar, concentration camps for Uighur Muslims in China, India’s brutal lockdown of Kashmir, Assad’s scorched-earth warfare against the Syrian people, the catastrophic multi-state war in Yemen, and the Israeli government’s occupation of Palestine.

Point being, Muslims have been harmed by many measures beyond President Trump’s Muslim Ban.

That is why American Muslims expect our government to work to end all of the harmful laws and policies that were enacted over the past twenty years, not just one policy enacted within the last four years.

As someone who has seen the American Muslim community grow and evolve over the past three tumultuous decades, it is heartening and reassuring to see that so many more American political leaders are listening to the needs and concerns of American Muslims.

However, our leaders must not take our support for granted. Nor should they assume that our community will be satisfied with pickings from the low hanging fruit of policy change.

Any president of the United States who is serious about countering anti-Muslim bigotry must reign in the excesses of the national security state, radically reform our criminal justice system, and pursue a peaceful and humanitarian foreign policy.

Ending the Muslim Ban would be a step in the right direction, but it should not and must not be the last step.

Nihad Awad is the co-founder and national executive director of the Council on American-Islamic Relations.