Action Alert: Join CAIR in Telling Congress, ‘Criticism of Israel’s Planned Annexation is Not Enough. You Must Take Action to Stop It.’ 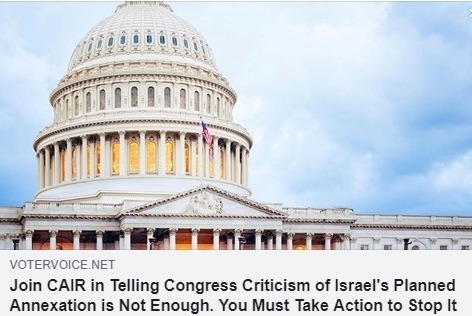 (WASHINGTON, D.C., 7/1/20) – The Council on American-Islamic Relations (CAIR), the nation’s largest Muslim civil rights and advocacy organization, is calling on all Americans to urge their members of Congress to take action against the Israeli government’s illegal plan to unilaterally annex more parts of the occupied West Bank and further entrench segregationist rule over Palestinians.

In a letter, CAIR called on Congress to cut or condition the $4 billion in U.S. taxpayer-funded giveaway to the Israeli government so that our country is not responsible for supporting the planned annexation and enabling a system of apartheid.

CLICK HERE: Urge Congress Criticism of Israel’s Planned Annexation is Not Enough. You Must Take Action to Stop It!

While the annexation has now been delayed due to international condemnation, it “will happen in the coming weeks or months,” according to Israeli Energy Minister Yuval Steinitz, a member of Prime Minister Benjamin Netanyahu’s right-wing Likud party.

“The time to only condemn Israel’s illegal plan to unilaterally annex more parts of the occupied West Bank and expand segregationist rule over Palestinians is over. The United States Congress must take swift action by cutting the $4 billion in U.S. tax dollar funding of Israel, or at the minimum, conditioning it so our country is not responsible for enabling a system of apartheid.

“Israel remains undeterred by international and congressional condemnation of its plans to continue annexing parts of the occupied West Bank.

“CAIR applauds the more than a dozen members of Congress that have joined Representative Alexandria Ocasio-Cortez in a letter pledging to ‘pursue legislation that conditions’ to the United States’ military aid to Israel to make sure that Americans ‘are not supporting annexation in any way.’ We urge every member of Congress to join Congresswoman Ocasio-Cortez in this pledge before Israel carries out its planned illegal annexation.

“American political organizations that unquestionably support Israel’s illegal annexation have made the strategic decision to not publicly push back against congressional condemnation, but instead are working behind the scenes to defend Israel’s illegal actions and block any legislation that censures Israel or impacts U.S. military aid to that country.

“Many supporters of the Black Lives Matter movement also support the Palestinian civil and human rights movement because of the undeniable similarities between the systematic racism and abusive policing African-Americans endure and Israel’s ethno-nationalist state policies of separate-but-not-equal policing, occupation and suppression of Palestinian lives.

“The killing of George Floyd only highlights the fact that U.S. police across the country, including the Minneapolis police department, have received ‘counter-terrorism’ training in Israel by Israeli police officers tasked with enforcing that country’s abusive and discriminatory occupation of Palestinians.

“President Trump’s counterproductive one-sided policies toward Israel have only emboldened the segregationist and autocratic administration of Israeli Prime Minister Benjamin Netanyahu at the cost of Palestinian lives and annexation of their land.

“While the United States has been historically biased toward Israel because of an apparent ‘special relationship’ our two nations have maintained over the decades – without censuring Israel for its planned annexation and conditioning U.S. military aid – our county will lose any credibility it has as a future arbitrator of a just and lasting peace in the region.

“For those in Congress who support Israel’s illegal plan of annexation let us be clear: You are in support of segregation and apartheid, and cannot, with any credibility, claim you support the principles of freedom and democracy.

“Annexation is occurring every day and will continue until Congress takes action. Your words or sternly written letters will not be enough to save Palestinian land and lives.

“If you oppose the oppression of Muslims in China, India and Burma, then do not turn a blind eye to the abuses and discrimination under which the Palestinians struggle.

“The U.S. should not be funding segregation or apartheid – it should be dismantling it. Oppose annexation with action.”

In the past week, the United Nation’s Secretary General António Guterres said implementation of annexation, “would constitute a most serious violation of international law, grievously harm the prospect of a two-State solution and undercut the possibilities of a renewal of negotiations.”

United Nation’s High Commissioner for Human Rights Michelle Bachelet also said, “annexation is illegal. Period. Any annexation. Whether it is 30 per cent of the West Bank, or five per cent” adding it would have “a disastrous impact on human rights” throughout the Middle East.

In CAIR’s 25-year history, it has worked to empower American Muslim to defend the civil, human and religious rights of oppressed Muslim communities overseas.