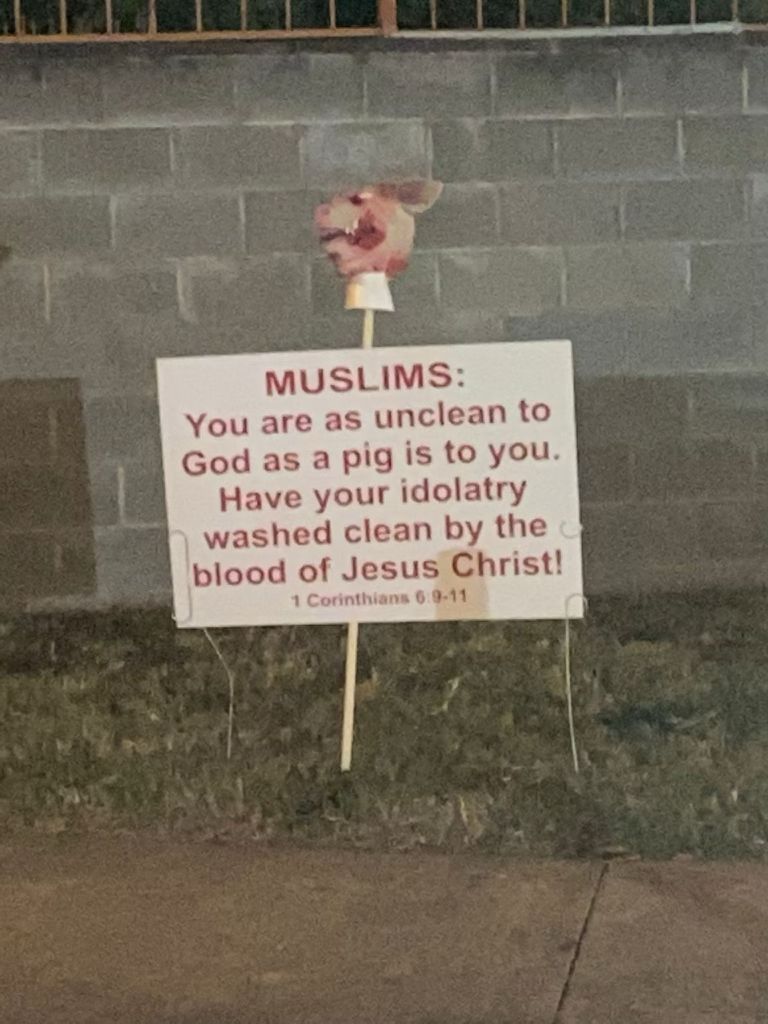 (AUSTIN, TX, 9/11/2021) – The Austin chapter of the Council on American-Islamic Relations (CAIR-Austin), the nation’s largest Muslim civil rights and advocacy organization, today called on state and federal law enforcement authorities to investigate as a hate crime a bloody pig’s head mask and an anti-Muslim sign placed in front of an Islamic Center and school on the 20th anniversary of the September 11, 2001, terror attacks.

Officials at the Islamic Center of Greater Austin and Austin Peace Academy took a photo of a bloodied pig’s head mask that was staked into the front lawn of the mosque along with a sign that read: “Muslims: you are as unclean to God as a pig is to you. Have your idolatry washed clean by the blood of Jesus Christ.” Worshippers discovered the hate vandalism around 1 a.m. this morning.

[NOTE: Anti-Muslim bigots often use pigs or pork products to intentionally offend Muslims because of the Islamic prohibition on consuming pork products.]

“We call on local, state and federal law enforcement authorities to investigate this heinous act of intimidation as a hate crime,” said CAIR-Austin Executive Director Faizan Syed. “Early today, the Austin Muslim community held a free COVID-19 vaccination drive and hosted a soup kitchen to mark the tragic 20th anniversary of September 11. While our community united with our fellow Americans to help build a better nation, a small hate-filled minority continues to use bigotry and intimidation to attempt to divide us and dishonor the lives lost on that tragic day.”

SEE: CAIR-Austin to Join 9/11 Day of Service to Feed the Hungry and Provide Free Covid Vaccines

On January 7, 2017, the Islamic Center of Lake Travis, an Islamic Center in Austin, was burned to the ground in what is believed to be an arson attack.

SEE: Mosque burns to the ground near Lake Travis
https://www.dallasnews.com/news/2017/01/07/mosque-burns-to-the-ground-near-lake-travis-cause-of-fire-unknown/

Yesterday, CAIR’s national headquarters held a news conference on Capitol Hill in Washington, D.C., to outline the results of a nationwide survey of American Muslims about their perspectives and experiences over the past twenty years.