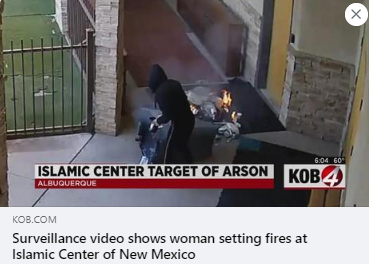 Surveillance video shows a woman setting multiple fires near the prayer hall of the the Islamic Center of New Mexico Monday morning. Mosque members believe the fires were started by a woman who came to the center last week expressing hostility. Anyone with information about the incident should contact the FBI or the Albuquerque Police Department.

Last week, CAIR’s Washington state chapter (CAIR-Washington) released surveillance video obtained from the Islamic Center of Olympia showing a car driving up, tossing an explosive device on the ground in front of the mosque and speeding away seconds before an explosion occurs.

The incidents come as Rep. Ilhan Omar, a Muslim member of Congress, is being targeted by Islamophobic attacks from GOP elected officials.  Rep. Omar is speaking this evening at CAIR’s annual virtual gala.

GOP leaders have not pushed back against that hate campaign.

SEE: House Republicans Express Concern Over Party Infighting, But Not the Islamophobic Rhetoric That Set It Off (Washington Post)

CAIR is urging houses of worship to take extra security precautions using its “Best Practices for Mosque and Community Safety” booklet. The advice in CAIR’s security publication is applicable to religious institutions of all faiths.