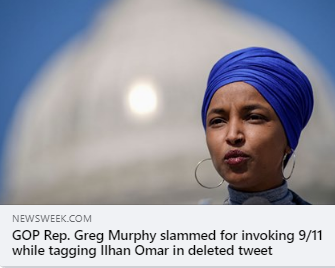 Rep. Omar tweeted her condolences for the officer slain in a recent vehicle ramming attack on police in Washington, D.C.

Rep. Omar tweeted: “Heartbroken to learn another CP was killed while protecting the Capitol. My thoughts and prayers go out to the officer’s family and the entire Capitol Police force. The death toll would have been worse if the assailant had an AR-15 instead of a knife.”

In the now-deleted tweet, Rep. Murphy wrote: “Would have been worse @Ilhan if they had been flying planes into the buildings also.”

“CAIR strongly condemns Representative Murphy for invoking the September 11th terror attacks while insulting a member of Congress who is Muslim. It is disrespectful to the victims of the 9/11 attacks, to their families and to the countless Muslim and other minority hate crime victims who were targeted in the wake of 9/11. His bigoted comments only serve to perpetuate the climate of hate that we are witnessing nationwide.

“One may disagree with a colleague without resorting to racism, Islamophobia or any other form of bigotry. We hope Representative Murphy’s Republican colleagues will condemn this Islamophobic attack and not just look the other way as they did when Muslim members of Congress were attack similarly in the past.”