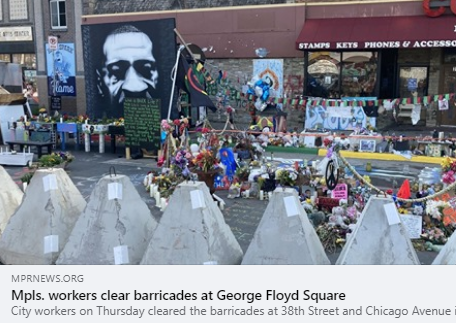 (MINNEAPOLIS, MN, 6/3/21) – This morning, the Minnesota chapter of the Council on American-Islamic Relations (CAIR-MN) will join community leaders and George Floyd Square caretakers to condemn the City of Minneapolis for opening George Floyd Square without meeting the demands of the community.

CAIR-MN Executive Director Jaylani Hussein said: “George Floyd square should be respected and the demands by the community for police accountability has yet to be met. George Floyd’s family need to be respected. The case for the remaining officers is pending and GFS is and will always be a national memorial for victims of police violence.”

“I was traumatized by the reopening of the street at George Floyd Square. I just cried because it was traumatizing to see what has happened. No one told me or the community. But one thing I will not do even though they opened the street: I will never drive my car down the street where my nephew was killed, knowing that he had cried out for his mama,” said Angela Harrelson, Aunt of George Floyd and Co-chair of the board of the George Floyd Global Memorial.

Early this morning, the City of Minneapolis sent dozens of city workers, bulldozers, and other equipment to George Floyd Square to remove mementos, signs, and other precious items left by visitors, as well as barricades surrounding the square. The actions of city officials to disrupt and dismantle a sacred memorial site to get back to business-as-usual is highly disturbing, traumatizing, and inhumane.

George Floyd Square has become a local, national, and international place for healing, memorialization of the life of George Floyd and many others who have been killed by police, and a place of resistance against oppression, racism, and white supremacy. There is literally no other place like it in the world.

“For the last 12 months, I have served as one of many volunteer caretakers of George Floyd Square. All I could do was weep when I saw how the city worked to tear down the one sacred space we have to memorialize those who have been killed by police. There are no words for the pain I feel. The fight for justice continues, said Jeanelle Austin, South Minneapolis resident and volunteer.

Last August, activists and community members presented a list of 24 demands to city leaders in order to address the short and long term concerns of community members, including the lack of economic opportunity in the community surrounding George Floyd Square (See Justice Resolution here). The city has not met those demands or responded in good faith to community concerns.