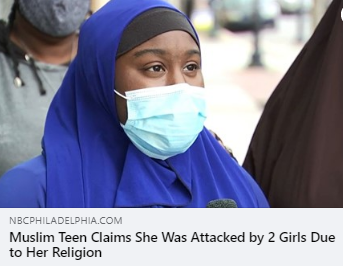 (PHILADELPHIA, PA, 5/7/21) – The Philadelphia chapter of the Council on American-Islamic Relations (CAIR-Philadelphia) today called on North Penn School District to fully investigate and rectify its missteps that led to Sanaa Beaufort, a junior at North Penn High School in Montgomery County, Pa., allegedly being attacked by two fellow students after a months-long online harassment campaign.

CAIR-Philadelphia also announced that it has agreed to provide legal representation for the student.

The attack took place on Tuesday, May 4, and was captured on a video subsequently posted to Instagram.

“This attack against Ms. Beaufort, and the violent racism and Islamophobia it displays, is unacceptable. The North Penn School District must act swiftly and decisively to combat it.The District should immediately cancel the suspension it gave to Ms. Beaufort. The family is especially distraught that after the attack, their daughter was made to walk through school halls without her hijab and the police’s initial questioning was accusatory against her.”

SEE: Muslim Teen Claims She Was Attacked by 2 Girls Due to Her Religion

He noted that CAIR’s Massachusetts released a report of Muslim high school students’ experiences of racially and religiously-motivated bullying in Massachusetts titled “Massachusetts Muslim Youth: Standing Up & Speaking Out.”

Conducted by surveying almost 200 Muslim public high school students in Massachusetts, the report indicated that some 60 percent of respondents report being mocked, verbally harassed, or physically abused for being Muslim.

Welbeck added that a survey conducted by CAIR’s California chapters in 2018-2019, revealed that almost 1 in 3 Muslim students do not feel safe, welcomed and respected at school, with almost a third of students reporting that school staff made offensive comments about Islam or Muslims at school.

BACKGROUNDER ON THE CASE:

The two attackers, both white students, allegedly harassed Beaufort online for months, calling her n***r, among other slurs. Her family reported the incident to the school, but say they did not receive any feedback. The family notes that a number of racist and Islamophobic incidents targeting Ms.Beaufort have occurred over multiple years within the same school district.

In his address to the rally, Dr. Ahmet Tekelioglu, CAIR-Philadelphia’s Education and Outreach Director said: “The school districts across Pennsylvania spend hundreds of thousands of dollars on inclusion and equity programs but one has to question the sincerity of such expenditures if the very things they are supposed to prevent happen after being warned and then the victim is punished.”

CAIR-Philadelphia will be working with local community leaders and other partners in its advocacy on behalf of Sanaa Beaufort and her family.

Video: CAIR Documented More Than 6,000 Civil Rights Complaints in ‘Resilience in the Face of Hate’