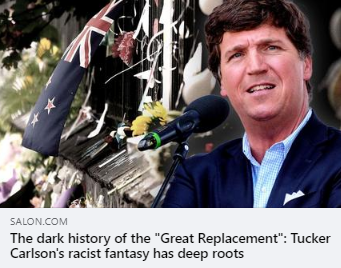 Carlson said President Biden is trying “to change the racial mix of the country.”

He added: “That’s the reason, to reduce the political power of people whose ancestors lived here and dramatically increase the proportion of Americans newly arrived from the Third World…It’s horrifying. But there’s a reason Biden said it. In political terms, this policy is called the great replacement, the replacement of legacy of Americans with more obedient people from far away countries.”

SEE: Tucker Carlson Goes All In On ‘The Great Replacement’ Theory, Says Biden Wants To ‘Change the Racial Mix Of the Country’

CAIR said the racist “great replacement” theory — falsely claiming that “Western civilization” is being destroyed by immigration — was the basis for a number of violent and deadly attacks on minority communities, including the massacre of 77 people in Norway by right-wing terrorist Anders Breivik, the New Zealand mosque massacre, the anti-Semitic chant that “Jews will not replace us” during the Charlottesville, Va., white supremacist rally, and the El Paso, Texas, Walmart massacre.

“By openly embracing the white supremacist ‘great replacement’ theory, which numerous mass murderers have cited in their manifestos, Tucker Carlson once again proved that his program poses a grave danger to our society. Fox News should fire Mr. Carlson and any other host who promotes these racist, dangerous conspiracy theories.

“And for the record, this country does not belong to any racial group, nor does greater diversity harm any racial group. When America welcomes immigrants and embraces diversity, that’s a good thing for everyone.”

He noted that CAIR has previously called on Fox News to fire Carlson and for advertisers to withdraw from his show over his anti-immigrant statements.