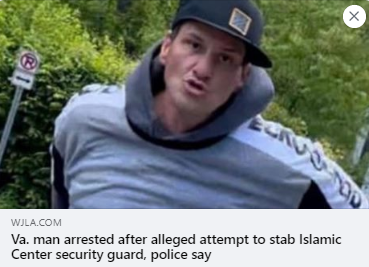 [NOTE: American Muslims are preparing to celebrate the end of Ramadan with the Eid ul-Fitr (EED-al-FITTER) holiday on or about May 13.]

Fairfax County Police said the perpetrator allegedly tried to stab a security guard at the mosque. The alleged attacker reportedly pointed his knife at several people before fleeing the scene.  Jonathan Lincoln, 41, of Falls Church, was later arrested and charged with two counts of assault and disorderly conduct. No one was injured in the incident.

“We stand in solidarity with the Dar Al Hijrah community,” said CAIR National Executive Director Nihad Awad. “No community should feel unsafe or intimidated as they carry out their religious obligations.”

“We urge mosques and Islamic centers in Virginia, Maryland and Washington, D.C., to enhance safety and security measures, particularly during the activities associated with the end of the Ramadan fast,” said CAIR’s Research and Advocacy Coordinator Huzaifa Shahbaz. “We thank law enforcement authorities for their swift and professional actions in apprehending the alleged assailant.”

Shahbaz noted that yesterday, CAIR joined the call by police in Arlington County, Va., for information on a person who allegedly left a Crystal City restaurant without paying, pushed a restaurant employee to the ground and used anti-Asian slurs.