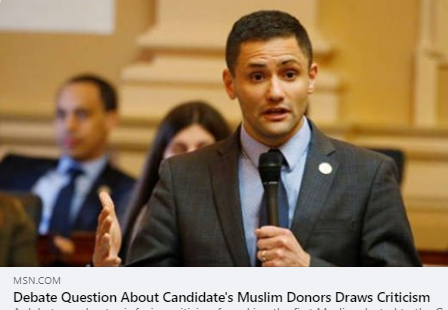 (WASHINGTON, D.C., 5/26/21) – The Council on American-Islamic Relations (CAIR), the nation’s largest Muslim civil rights and advocacy organization, tonight welcomed a Washington, D.C., area television station’s apology for an Islamophobic question asked by one of its anchors during a political debate last night in Virginia.

During that debate, a Muslim candidate for Lieutenant Governor of Virginia was asked whether he can “assure Virginians if you’re elected, you’ll represent all of them, regardless of faith or beliefs?”

“During an important, relevant exchange related to campaign finance during the debate, our anchor, Dave Lucas, asked an inappropriate and disrespectful question to Delegate Sam Rasoul. We have reached out directly to Delegate Rasoul’s campaign and expressed our sincere apology for this question and for the impact of these words.”

“We welcome this apology and thank WJLA for stepping up and taking appropriate action in response to this Islamophobic incident,” said CAIR National Executive Director Nihad Awad. “All Americans should be able to engage in our nation’s political process without fear of being singled out based on their faith.”

NOTE: As a 501(c)(3) nonprofit, CAIR does not endorse or oppose any candidate running for office.

Last month, Judge Zahid Quraishi, the first ever Muslim nominee for Federal District Court, was asked by Senate Committee on the Judiciary Chairmen “What do you know about Sharia Law?”

SEE: CAIR Op-Ed: What Senators on the Judiciary Committee Should Know About “Sharia Law”