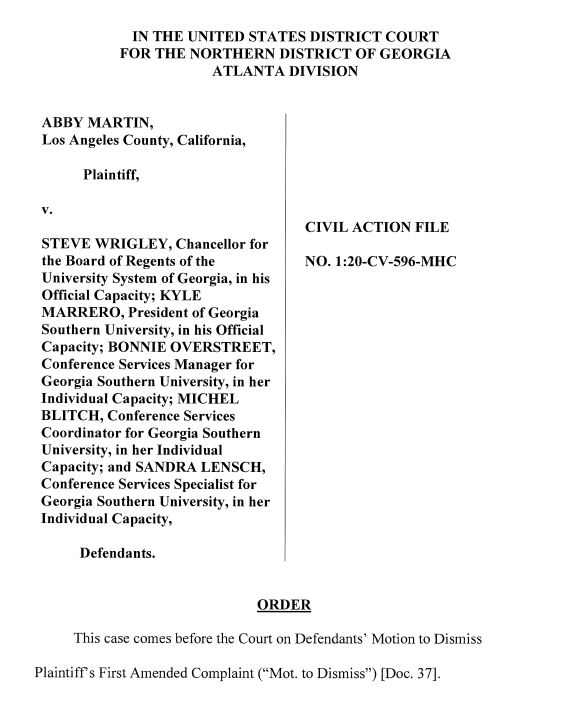 (ATLANTA, GA – 5/24/2021) — The Georgia chapter of the Council on American-Islamic Relations (CAIR-Georgia), CAIR Legal Defense Fund and the Partnership for Civil Justice Fund (PCJF) today welcomed a “major victory” in their lawsuit against Georgia’s Israel boycott law after a federal district court ruled that the State of Georgia’s 2016 law punishing boycotts of Israel is an unconstitutional violation of the First Amendment.

[MEDIA ADVISORY: There will be a briefing on this case live at 3 p.m. ET on CAIR’s Facebook page: https://www.facebook.com/CAIRNational ]

In an order released today, Judge Mark Cohen ruled that the University System of Georgia violated journalist and filmmaker Abby Martin’s constitutional rights when it cancelled her speaking engagement on a college campus because she refused to sign a state-mandated oath pledging not to engage in boycotts of Israel. Martin is a well-known advocate of the Boycott, Divestment, and Sanctions (BDS) movement against Israel, which the court ruled is protected by the First Amendment.

[NOTE: In 2016, Governor Nathan Deal signed into law SB 327, which requires any person or company that enters into a contract with the State of Georgia worth $1,000 or more to sign a loyalty oath pledging not engage in political boycotts of the Israeli government based on its treatment of Palestinians.]

In his 29-page decision, Judge Cohen identified extensive constitutional problems with Georgia’s anti-BDS law. He held that the anti-BDS law “prohibits inherently expressive conduct protected by the First Amendment,” which “burdens Martin’s right to free speech.” Judge Cohen also ruled that the anti-BDS law’s requirement that Martin sign an oath to refrain from boycotting Israel is “no different than requiring a person to espouse certain political beliefs or to engage in certain political associations.”

“This outrageous effort by Georgia politicians to censor free speech rights for a cause they oppose was ruled unconstitutional today,” said Partnership for Civil Justice Fund counsel Mara Verheyden-Hilliard. “This ruling comes at a crucial moment, when millions of Americans are questioning the use of U.S.-provided weapons in the onslaught against the Palestinian people and makes clear that the Constitution protects participation in the BDS movement, just as it protected the seminal civil rights and labor organizing boycotts that moved our society forward.”

“Whether in speaking out against voter suppression laws here in Georgia or human rights violations against the Palestinian people, Georgians are actively engaged in their constitutionally protected right to free speech and coordinated boycott. Now, as much as ever, these rights must be cherished and preserved. The court’s decision’s today is a significant step in ensuring Georgians are able to do so freely today and in future.”

“Israel’s latest violent onslaught against Palestinians underscores the importance of advocacy for Palestinian human rights,” said CAIR Senior Litigation Attorney Gadeir Abbas. “By standing up against this illegal anti-BDS law, Abby Martin ensures that all Americans have the freedom to stand up for Palestine.”

In a statement, award-winning journalist and filmmaker Abby Martin said:

“I am thrilled at the judge’s decision finding this law unconstitutional as it so clearly violates the free speech rights of myself and so many others in Georgia. My First Amendment rights were restricted on behalf of a foreign government, which flies in the face of the principles of freedom and democracy.

“The government of Israel has pushed state legislatures to enact these laws only because they know that sympathy and support for the population they brutalize, occupy, ethnically cleanse and subject to apartheid, is finally growing in popular consciousness ––they want to hold back the tide of justice by preemptively restricting the right of American citizens to peacefully take a stand against their crimes.”

While the judge’s opinion clearly indicates his view that the law is unconstitutional, the decision does not yet strike down the law. The next stage of the case will regard what steps the court will take to address to the constitutional violation identified.

Similar measures have been enacted in 25 other states as part of an effort to block the growing Boycott, Divestment and Sanctions (BDS) movement. Modeled after the global South African anti-apartheid movement, the BDS movement’s stated goal is to pressure the Israeli government to end its occupation of Palestinian territory.

CAIR, the American Civil Liberties Union, and other civil rights organizations have filed free speech lawsuits against anti-BDS laws in Arkansas, Arizona, Maryland, and Texas, where CAIR won a landmark legal victory in 2019.