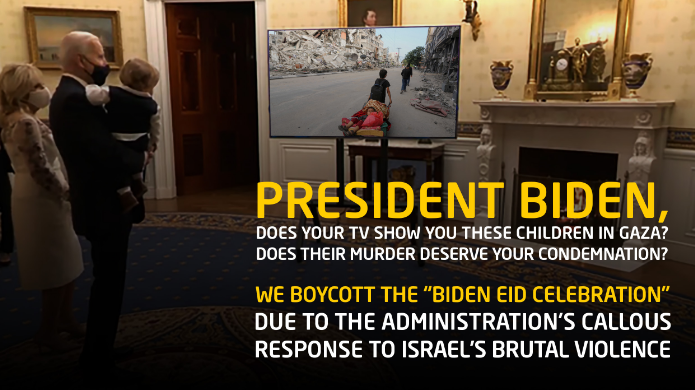 (WASHINGTON, D.C., 5/15/21) – The Council on American-Islamic Relations (CAIR), the nation’s largest Muslim civil rights and advocacy organization, today announced that it will join other Muslim organizations in boycotting the White House’s virtual Eid celebration due to the Biden Administration’s “incredibly disappointing and deeply disturbing” response to the Israeli government’s human rights abuses against Palestinians in Gaza and East Jerusalem.

The “White House Virtual Eid Celebration” is scheduled to take place online on Sunday, May 16. The event is designed to recognize the Eid ul-Fitr (EED-al-FITTER) holiday that marks the end of the month-long fast of Ramadan.

A growing coalition of American Muslim organizations has called for the community to boycott the event in response to Biden administration statements that “ignore the Israeli assault on Al-Aqsa and the Muslims worshipping inside, the expulsion taking place in the Jerusalem neighborhood of Sheikh Jarrah, and the ongoing siege of Gaza that has already claimed the lives of hundreds, but also have the audacity to lay the blame on the victims: the Palestinian people.”

“CAIR joins other American Muslim organizations in cancelling our plans to take part in President Biden’s Eid celebration. We cannot in good conscience celebrate Eid with the Biden Administration while it literally aids, abets and justifies the Israeli apartheid government’s indiscriminate bombing of innocent men, women and children in Gaza. President Biden has the political power and moral authority to stop these injustices. We urge him to stand on the side of the victims and not the victimizer.”

“The American Muslim community has been incredibly disappointed and deeply disturbed by the Biden Administration’s unbalanced response to Israel’s planned ethnic cleansing in Sheikh Jarrah, attacks on worshippers at Masjid Al-Aqsa and the bombing of civilians in Gaza, which we would have expected from the previous administration.

“If the White House continues along this morally-unconscionable path as more Palestinian children die, the White House risks causing severe damage to President Biden’s relationship with American Muslims and all others who defend civil and human rights.”

Awad noted that CAIR had previously encouraged the Muslim community to take part in the White House Eid event.

Since then, CAIR said, the Biden Administration has refused to condemn or even mildly criticize the Israeli government for sparking this cycle of violence by attempting to expel Palestinian families from their homes in Sheikh Jarrah and attacking Palestinian worshippers at Masjid Al-Aqsa, one of the holiest sites in the world for Muslims.

An increasing number of Democratic members of Congress have called upon President Biden to more assertively confront the Israeli government’s violations of Palestinian human rights.

[NOTE: During Eid ul-Fitr or “feast of fast breaking” holiday, Muslims would normally offer public prayers, exchange social visits and seek to strengthen family and community bonds. Eid ul-Fitr is the first of the two major Muslim holidays. The second holiday, Eid ul-Adha (EED-al-ODD-ha), comes near the end of the Hajj, or pilgrimage to Mecca.]

Thomas Jefferson was the first President to host an iftar, the meal breaking fast during Ramadan, at the White House in 1805. Every President since Bill Clinton in 1996 has hosted an iftar for members of the community during their presidencies. President Trump ended the tradition in 2017 and restarted it in 2018 but largely limited invitations to foreign diplomats.