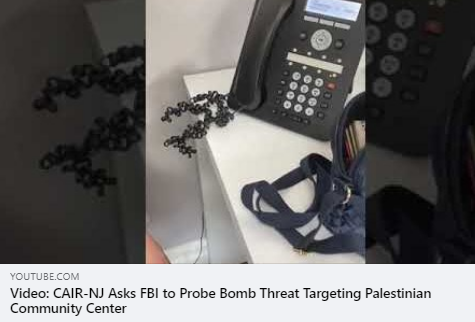 (SOUTH PLAINFIELD, NJ, 6/1/2021) – The New Jersey chapter of the Council on American-Islamic Relations (CAIR-NJ) today called on the FBI to investigate bomb threats targeting the Palestinian American Community Center (PACC) in Clifton, N.J. CAIR-NJ also called on Clifton police to provide extra security for the PACC in the coming days.

The calls began at around 11 a.m. and continued until about 6 p.m.

The caller was apparently agitated by recent tensions in Palestine and Israel and referenced Israeli Prime Minister Benjamin Netanyahu during the conversation.

The caller said in part;

Caller: “Are you Palestinian?”

Respondent: “Why does that matter?”

Caller: “So I know to come blow you up.”

Caller: “Is this the terrorist community center?”

Caller: “I’m going to come rape you and give you a taste of your own medicine”

Caller: “I’m going to go over there and beat the shit out of you.”

Caller: “You Palestinians blow up children and behead them.”

Caller: “You don’t even have a country.”

Caller: “They are not going to catch me, so I do not know why you’re worried about calling it in.”

Clifton police responded to the scene after CAIR-NJ called for security to be provided. The police will investigate the incident as a potential hate crime.

CAIR-NJ filed an official complaint with the FBI Tuesday evening.

“Our office has filed a complaint with the FBI and expects a formal investigation to follow immediately. We urge the FBI and state law enforcement authorities to take domestic terrorism threats seriously and to ensure the safety of PACC’s members.

“Propaganda in support of Israeli apartheid and brutality that demonizes Palestinians provides fertile ground for anti-Palestinian and anti-Muslim hatred here in America. This propaganda, adopted by some New Jersey elected officials, gives a false sense of entitlement to those — like the racist caller — who make violent threats against Palestinian community members. This propaganda puts Palestinian and American Muslims at risk. It needs to be condemned and repudiated at every opportunity by elected officials and policymakers.

“Calling out anti-Palestinian hatred and Islamophobia is not controversial. New Jersey elected officials must be loud and clear in their condemnation of this violence.”

He noted that CAIR today called on all Americans to urge members of Congress to reject Israel’s new request for a $1 billion in additional, unconditional, “emergency” military aid from U.S. taxpayers following its war crimes in Gaza that murdered 256 Palestinians, including 67 children, and injuring 1,200 more, in violation the U.S. Foreign Assistance Act and Arms Export Control Act.

“Most important for us right now is for people to recognize how layered this incident is. It’s heavily politically charged, and anti-Palestinian, as well as extremely misogynistic. This did not come out of nowhere – this comes from this country’s blind political, financial, and moral support to Israel. What happens abroad affects what happens to our communities here, and right now we’re most concerned about the beautiful and diverse community we serve – especially the most vulnerable within, our women and children. The very least our local and national government can do is acknowledge the physical, emotional, and psychological toll and trauma on our people here and in Palestine.”