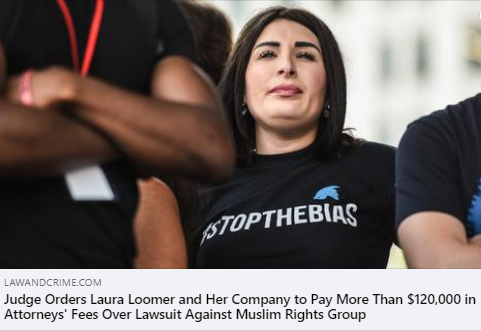 SEE: Judge Orders Laura Loomer and Her Company to Pay More Than $120,000 in Attorneys’ Fees Over Lawsuit Against Muslim Rights Group

CAIR sought those costs and fees last year following an 11th Circuit Court of Appeals ruling affirming the dismissal of a lawsuit filed by Loomer and Illoominate Media against CAIR. Today, the court said Loomer owed $123,761.65 to CAIR and its Florida chapter, plus $661.72 in costs.

In 2019, the district court dismissed both CAIR and CAIR-Florida from Loomer’s “nonsensical” lawsuit. Loomer had alleged—based on a prank that had long since been revealed not to be true—that CAIR had persuaded Twitter to ban the Islamophobic failed Congressional candidate from Twitter.

“We welcome this ruling and hope it sends a message to all those who file frivolous lawsuits that there will be legal and financial consequences. We plan to vigorously seek to collect the funds from Loomer and Illoominate Media, and use those funds to further CAIR’s mission of promoting justice and protecting the civil rights of all Americans.”

“Loomer filed this lawsuit in large part to harass CAIR and to defeat its mission of protecting the civil rights of American Muslims. This ruling shows that tactics of legal harassment can backfire on those who use them,” said CAIR Trial Attorney Justin Sadowsky.