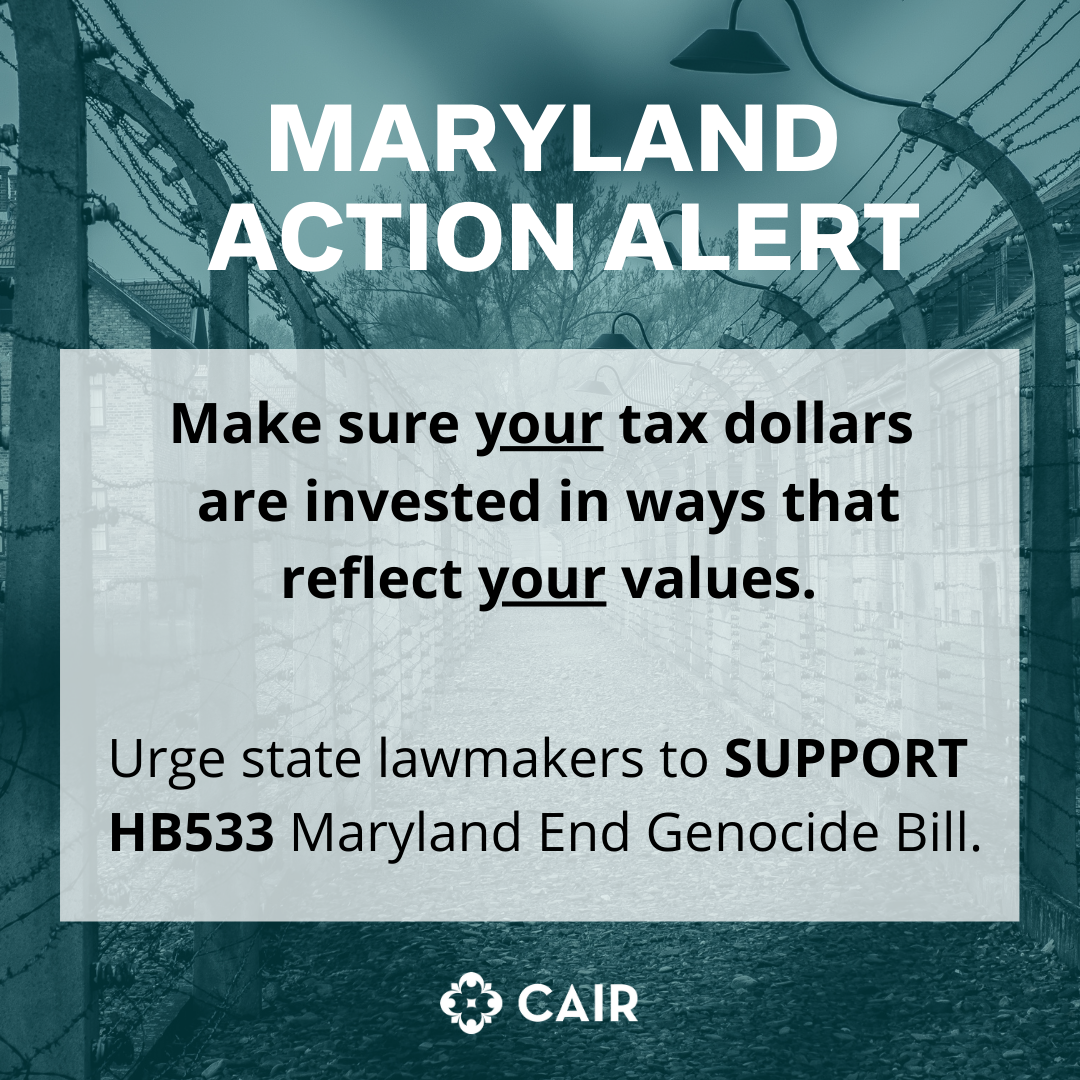 (BALTIMORE, MD, 1/25/2021) – The Maryland office of the Council on American Islamic relations (CAIR) is calling on all Marylanders to contact their state lawmakers and request them to support the Maryland End Genocide Bill (HB533).

This bill directs the Maryland state government to enter into contracts only with those corporations that have adopted a formal policy of refusing to do business with governments that engage in genocide or crimes against humanity.

READ: HB533 State Government – Prevention of Genocide and Crimes Against Humanity and the Commission on Genocide Prevention

The Maryland End Geocide bill comes at a time when there are many human rights atrocities taking place across the globe – like the government of China’s genocide and oppression targeting Uyghur Muslims and other Turkic ethnic minorities.

This measure will also ensure that the state establishes the Maryland Commission on Genocide Prevention to research which governments are at risk of committing genocide or crimes against humanity, identify corporations that do business with those governments, and hold hearings on the implementation of the legislation.

Additionally, this bill will create an economic incentive for corporations to cease doing business with governments engaged in these horrifying acts. This bill will not only encourage corporations to engage in ethical practices, but it will indirectly contribute to the basic desire for human rights for everyone around the world.

What the Bill Does Not Do

• No Regulation of Business or Commerce

The bill creates no new regulations on business or commerce. The bill simply requires the state government to change its own internal procurement and investment policies and practices in line with Maryland’s values. In this manner, Maryland is simply exercising its own ethical choices as a market participant to make investments and to buy goods and services. In so doing, Maryland may create market incentives for corporations to adopt a policy of not doing business with governments engaged in genocide or crimes against humanity. However, no corporation is legally required to take any action as a result of this law.

• No Burden on Small and Local Business

By simply acting ethically as a participant in the marketplaces for goods, services, and capital, the State of Maryland under this law would clearly avoid acting unconstitutionally to conduct its own foreign policy or its own regulation of interstate or international commerce. Under the U.S. Constitution, foreign policy powers are reserved to the U.S. federal government and the power to regulate interstate and international commerce is reserved to the U.S. Congress.

During the American Revolution, town meetings adopted resolutions calling for a boycott of British-made goods. The Boston Tea Party seized on the spirit of these resolutions through its historic act of dumping British tea in Boston Harbor. This revolutionary campaign is captured in T.H. Breen’s book “The Marketplace of Revolution: How Consumer Politics Shaped American Independence.” It was in part through this “boycott British” campaign that the American colonies united and rose up to secure their independence.

City and state “End Genocide” laws build on this American tradition. These laws follow in the footsteps of other similar successful campaigns. In the 1980s, the anti-apartheid movement forced corporations to divest from South Africa under pressure from municipal and state laws.  In the 1990s, over 100 corporations withdrew from Burma (Myanmar) after Massachusetts and 20 cities passed laws effectively boycotting companies doing business in the country. In the 2000s, the Save Darfur campaign mobilized pressure on oil companies in Sudan. Today, the fossil fuel divestment campaign is succeeding in mobilizing state and local government to tackle climate change.

By passing a Genocide Prevention Law, a city or state can express its citizens’ values while also ensuring that, by its spending and investment of taxpayer dollars, it represents its citizens’ values as an actor in the marketplace for goods, services, and capital. In so doing, the city or state will also act in solidarity with people at risk of genocide or other grave human rights abuses.