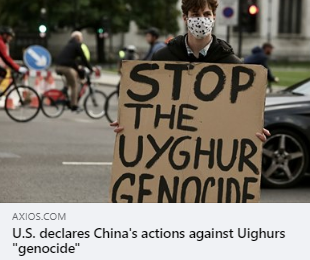 (WASHINGTON, D.C., 1/19/2021) – The Council on American-Islamic Relations (CAIR), the nation’s largest Muslim civil rights and advocacy organization, today welcomed the U.S. government’s decision to declare China’s actions against Uyghurs Muslims a “genocide.” The United States is the first country to adopt these terms to describe the Chinese government’s human rights abuses in Xinjiang.

In a statement, Pompeo said “After careful examination of the available facts, I have determined that since at least March 2017, the People’s Republic of China (PRC), under the direction and control of the Chinese Communist Party (CCP), has committed crimes against humanity against the predominantly Muslim Uyghurs and other members of ethnic and religious minority groups in Xinjiang.” He also added in a second determination that the Chinese government has also committed “genocide” there.

Pompeo said that China’s crimes are ongoing and include human rights abuses such as forced labor, forced sterilization, restrictions on religious freedom, freedom of expression and movement, arbitrary imprisonment of over 1 million people, and torture for those detained.

“We welcome our government’s decision to finally and officially declare China’s heinous actions against Uyghurs Muslims as genocide. China’s egregious actions in Xinjiang amounts to a gross and ongoing violation of human and religious rights. China continues to disregard international law and United Nations treaties to which it is a party,” said CAIR’s National Executive Director Nihad Awad.