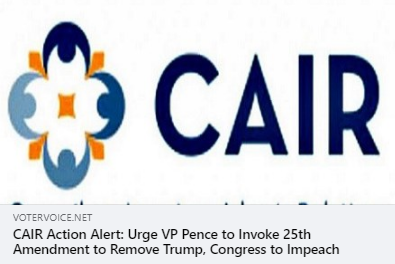 (WASHINGTON, D.C., 1/8/21) — The Council on American-Islamic Relations (CAIR) is calling on all Americans to urge Vice President Mike Pence and members of the Cabinet to invoke the 25th Amendment and remove President Trump from office.

CAIR is also requesting members of Congress to impeach the president and ensure he can never hold a federal office again.

Following Wednesday’s deadly failed insurrection attack on the U.S. Capitol by supporters of President Trump – the president is facing nationwide calls to resign over claims of sedition and fomenting insurrection.

The pro-Trump violence at the Capitol resulted in the first time Congress had been breached since the war of 1812, with five dead, including one Capitol Hill police officer, 52 arrests, and 14 police officers injured.

Until today, Trump had failed to concede the election to President-elect Joe Biden, only doing so under threat of being removed from office or impeached by Congress.

“Following Wednesday’s failed insurrection at the U.S. Capitol by pro-Trump rioters inspired by the president’s false allegations of election fraud, our nation is left with only three options: 1) Trump resigns in disgrace, 2) Vice President Pence and the Cabinet invoke the 25th Amendment, or 3) Congress expedites the impeachment of Trump, so that he can never serve in federal office again,” said CAIR Director of Government Affairs Department Robert S. McCaw.

Repeatedly making the false allegation of “election fraud” and that “the election was stolen” from him – on Wednesday, Trump instructed his followers at a White House rally to go “walk down to the capitol” and to “fight,” “never give up” and “never concede.”

The insurrection occurred while the U.S. House and Senate were in the process of certifying the results of the Electoral College vote, affirming the election of Joe Biden as U.S. President.

The vote was disrupted as members of Congress were told to shelter in place or leave the building as pro-Trump rioters took over the U.S. Senate floor and sections of the U.S. Capitol Building, including U.S. House of Representatives Speaker Nancy Pelosi’s private office.

The vote was concluded later that evening after the D.C. National Guard and Virginia State Police assisted Capitol Police in retaking and clearing the building. Biden will be inaugurated on January 20.

That day, CAIR issued a statement condemning the attack on U.S. Capitol as “violent insurrection,” and called on Trump to resign or face impeachment.

Both House Speaker Pelosi and incoming Senate Majority Leader Chuck Schumer are calling on Pence to invoke the 25th Amendment. Pelosi has also said the House will move next week to impeach Trump if he does not resign “immediately.”