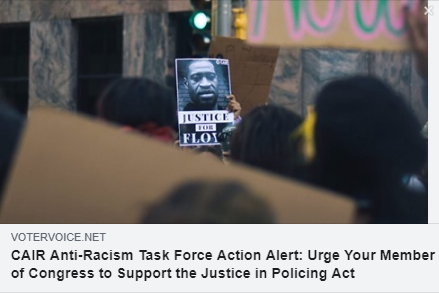 (WASHINGTON, D.C., 6/8/20) – The Council on American-Islamic Relations (CAIR), the nation’s largest Muslim civil rights and advocacy organization, is calling on all Americans to contact their members of Congress in the U.S. House and Senate to urge support for the “Justice in Policing Act.”

Today, congressional leaders announced the Justice in Policing Act, a federal bill cosponsored by more than 200 members of the U.S. House and Senate  in response to the police killings of unarmed black Americans like George Floyd and Breonna Taylor and nationwide and to #BlackLivesMatter protests seeking an end to police racism, classism, violence, misconduct, and abuse of authority.

TAKE ACTION: URGE YOUR MEMBERS OF CONGRESS TO SUPPORT THE JUSTICE IN POLICING ACT

While no one congressional reform package can ever fully address the systemic problem of police killings, violence and profiling targeting Black Americans and other minority communities, the Justice in Policing Act would adopt:

“CAIR supports the Justice in Policing Act as a good first step toward Congress listening to the demands of Black Lives Matter protesters and Americans nationwide who are fed up with congressional inaction in the face police violence against Black Americans and other minorities,” said CAIR Director of Government Affairs Department Robert S. McCaw. “We look forward to working with Congress to strengthen civil rights protections surrounding body-worn cameras and urge a complete ban on qualified immunity and the transfer of military equipment to police.”

McCaw noted that the Washington-based civil rights organization and the American Muslim community are standing in solidarity with all those challenging anti-black racism.