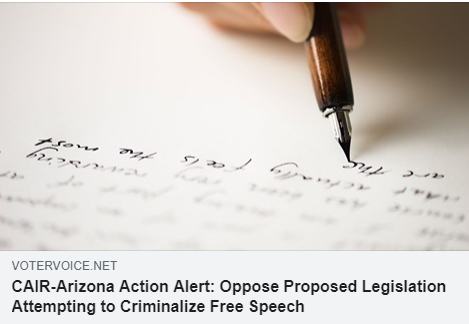 (PHOENIX, AZ, 3/9/20) – The Arizona chapter of the Council on American-Islamic Relations (CAIR-AZ) is urging state residents to take action and oppose a new set of bills introduced in the state legislature that could make public criticism of Israel a possible hate-crime.

TAKE ACTION: Tell Your Senator to Vote No on SB 1143

“CAIR-Arizona opposes any attempts to suppress First Amendment expression. We stand firmly against anti-Semitism, Islamophobia and all forms of bigotry. Criticism of the actions of a foreign nation for its human rights record should never be restricted by local, state or federal law.  The Arizona Senate must ensure that all Americans have the right to free expression,” said CAIR-AZ Executive Director Imraan Siddiqi.

Companion bills SB 1143 and HB 2683 would amend Arizona law to incorporate a definition of anti-Semitism that is so broad and vague that statements that are solely critical of Israel could be used as evidence of a hate crime, including many statements protected by the First Amendment.

The legislation’s broad definition of anti-Semitism risks incorrectly equating constitutionally-protected criticism of the government of Israel – usually in the form of speaking out against the state’s abuse of Palestinian human rights or in support of political boycotts – with anti-Semitism.

People who protest Israel’s human rights abuses could find themselves facing a bias crime prosecution because of their political speech. This would be a violation of the First Amendment.

Stern is on the record stating that the definition was “never intended as a vehicle to monitor or suppress speech on campus” and that it was not only unnecessary but would also “hurt Jewish students and the academy.” Stern has testified before Congress about the ways in which the definition would be used to suppress free speech.