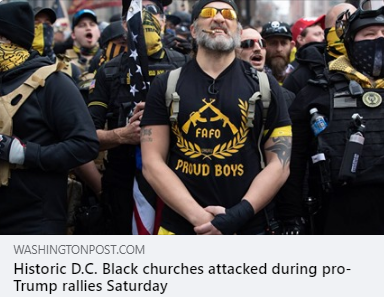 (WASHINGTON, D.C., 12/13/2020) – The Council on American-Islamic Relations (CAIR), the nation’s largest Muslim civil rights and advocacy organization, today called on the U.S. Department of Justice (DOJ) to launch a civil rights investigation of attacks on historic Black churches in Washington, D.C., allegedly by those taking part in yesterday’s pro-Trump protests.

According to the Washington Post, videos posted on Twitter show “a group of people identified as Proud Boys marching with a Black Lives Matter banner held above their heads, then cheering as it is set on fire. . .” The banner was reportedly taken from Asbury United Methodist Church.

“Hate and vandalism targeting any house of worship must be condemned by Americans of all faiths and backgrounds. Anyone attempting to intimidate those fighting anti-Black racism and white supremacy must face the full force of the law. The Justice Department should investigate these incidents as possible violations of federal civil rights laws.”

He said CAIR and the American Muslim community are standing in solidarity with all those challenging anti-Black racism, Islamophobia, anti-Semitism, and white supremacy.