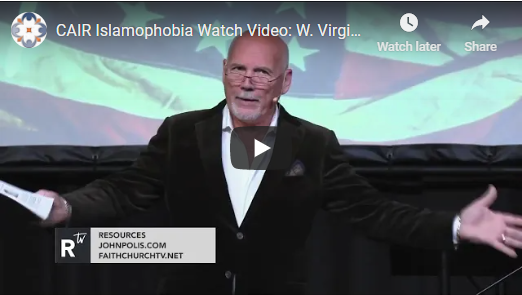 (WASHINGTON, D.C., 11/9/2020) — The Council on American-Islamic Relations (CAIR), the nation’s largest Muslim civil rights and advocacy organization, today called on faith and political leaders in West Virginia to repudiate anti-Muslim hate and falsehoods in a recent sermon by a televangelist in that state.

In a Nov. 1 broadcast, Fairmont, W.Va.,-based televangelist John Polis preached about the “Islamic invasion,” referred to an Islamic center in Charleston, W.Va., and falsely claimed that “the majority of the mosques are used for training troops for war.” He also falsely asserted that “American ideals are the enemy of Islam,” that “Islam is a big danger in our country” and that there are no real “moderate” Muslims.

“We ask all faith and political leaders in West Virginia who value religious diversity and mutual respect to speak out strongly against these false, hate-filled and divisive smears,” said CAIR Research and Advocacy Coordinator Huzaifa Shahbaz. “Now is the time when Americans of all faiths and backgrounds must unite in rejecting bigotry and xenophobia.”

He added that the American Muslim community and CAIR stand in solidarity with all those challenging anti-Black racism, xenophobia, Islamophobia, anti-Semitism, and white supremacy.