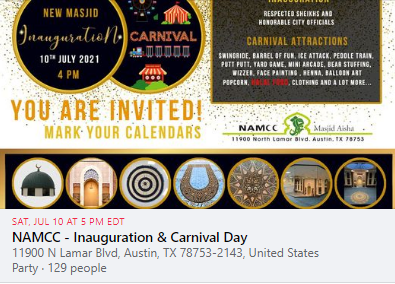 (AUSTIN, TX, 7/8/2021) – On Saturday, July 10, the Austin chapter of the Council on American-Islamic Relations (CAIR-Austin) will join the North Austin Muslim Community Center (NAMCC) in a celebration marking o mark the completion of their Islamic Center to better serve the growing Austin Muslim population.

Founded in 1994, (NAMCC) grew from a handful of worshipers in a small house on North Lamar boulevard to thousands of worshipers attending services in a makeshift building at Masjid Aisha, the official name of the worship space at NAMCC.

“This expansion project is an important step in providing worship space and other important services to the growing Austin Muslim community,” said William White Government Affairs Manager of CAIR-Austin. “Masjid Aisha and the community it serves are an important part of the diverse makeup of our city. This is a historic accomplishment.”

The Mosque started construction in early 2019 and has recently completed the new prayer space- a 20,000 square foot space in addition to the already existing 9000 square foot space that was previously used for prayer services as well as the five daily prayers. North Austin Muslim Community Center has used its previous space as a grocery distribution center and hosted a medical clinic for those in need both during the pandemic and prior to Covid-19. They have also hosted water distributions, food drives, in addition to the variety of religious and educational services provided to the community.

“We are delighted today to have the city officials and our community leaders present with us to celebrate the inauguration of the new facility. The facility expansion was a need of the Austin Muslim community of over 30,000 residents,” said Altaf Khatri, President of North Austin Muslim Community Center

“With the new facility at North Austin, Muslim Community Center will be able to serve the Muslim community with their religious services while bridging gaps between Muslim community and its neighbors.”

The celebration will include children’s activities, speeches from community leaders, guided tours of the Masjid, and worship service. This event is free and open to the public of all faiths and backgrounds.