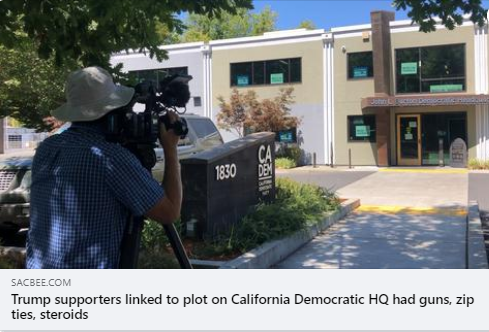 (SACRAMENTO, CA – 7/17/2021) – The California chapter of the Council on American-Islamic Relations (CAIR-CA) today condemned an alleged plot by supporters of former President Trump to blow up the Democratic headquarters building in Sacramento.

Authorities say the two men devised the plot because of their false belief that Trump won the 2020 election. Dozens of weapons, including machine guns and bombs, were seized.

The two men, Ian Benjamin Rogers and Jarrod Copeland, were indicted on charges of conspiracy to destroy a building, possession of destructive devices and machine guns and obstruction of justice.

“This alleged plot clearly shows that the promotion of lies and conspiracy theories seeking to undermine our democratic process will inevitably lead to acts of violence planned and carried out by those who base their actions on false information and hatred of others. All Americans must speak out strongly against the rising level of misinformation being promoted by irresponsible current and former leaders.”