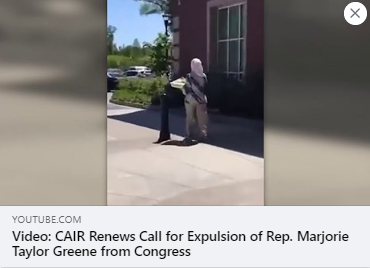 (ATLANTA, GA, 3/15/2021) – The Council on American-Islamic Relations and its Georgia chapter (CAIR-Georgia) today renewed a call for far-right extremist Republican Rep. Marjorie Taylor Greene’s expulsion from Congress based on a newly-revealed video showing her making a racist and Islamophobic remark targeting a Muslim woman.

In the video, she shows a Muslim patron wearing an Islamic headscarf, or hijab, outside a local library and states, “I want to show you something. See that right there? Our library is full of that.”

“Representative Marjorie Taylor Greene’s comments are not surprising given her documented history of bigotry and extremism. Congress should immediately take the necessary steps to expel her. Her racist and Islamophobic comments have no place in our most important institution of government, which should work to represent a diverse society,” said Huzaifa Shahbaz, CAIR’s national research and advocacy coordinator.

Earlier this year, CAIR called for her expulsion over violent and threatening remarks she reportedly made online over a multi-year period.

A CNN KFile review of hundreds of posts and comments from Taylor’s Facebook revealed that she repeatedly expressed support for executing prominent Democratic politicians in 2018 and 2019. Taylor also has a track record of endorsing QAnon conspiracy theories and making anti-Semitic and Islamophobic statements.

In a Facebook post from January 2019, Greene liked a comment that said “a bullet to the head would be quicker” to remove Speaker Nancy Pelosi. Moreover, she liked comments about executing FBI agents, who in her perspective, were part of the “deep state” working against Trump.