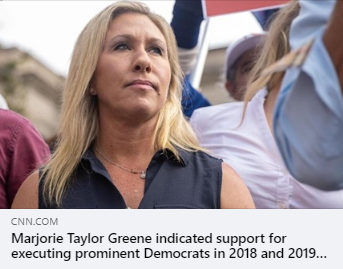 (ATLANTA, GA, 1/28/2021) – The Georgia office of the Council on American-Islamic Relations (CAIR-Georgia) today called for Republican Rep. Marjorie Taylor Greene’s expulsion from Congress based on violent and threatening remarks the far-right extremist reportedly made online over a multi-year period.

A recent CNN KFile review of hundreds of posts and comments from Taylor’s Facebook revealed that she repeatedly expressed support for executing prominent Democratic politicians in 2018 and 2019. Taylor also has a track record of endorsing QAnon conspiracy theories and making anti-Semitic and Islamophobic statements.

In a Facebook post from January 2019, Greene liked a comment that said “a bullet to the head would be quicker” to remove Speaker Nancy Pelosi. Moreover, she liked comments about executing FBI agents, who in her perspective, were part of the “deep state” working against Trump.

“Expelling a member of Congress is a serious and unprecedented step that should only happen in the most extreme cases of misconduct. If Marjorie Greene Taylor did indeed express support for the murder of elected officials, all members of Congress should unite to expel her from office. Threats of violence against political opponents have no place in our country.”

“In the context of the January 6 insurrection especially, calls for violence by those in positions of power can no longer be taken lightly. Elected officials must face consequences for their role in sowing divisions and creating fear.”

Yesterday, Congressman Jimmy Gomez announced that he will introduce resolution to expel Congresswoman Marjorie Taylor Greene from the U.S. House of Representatives.