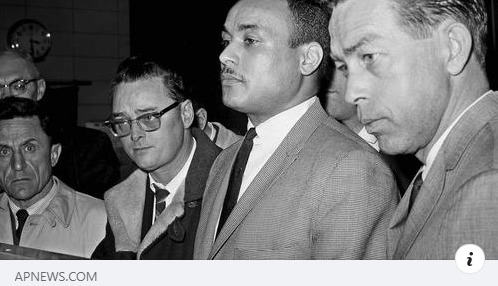 CAIR and CAIR-NY also called on the Department of Justice (DOJ) and New York Police Department (NYPD) to conduct a full investigation into a deceased NYPD officer’s claim that law enforcement was involved in enabling the assassination.

“It was my assignment to draw the two men into felonious federal crime, so that they could be arrested by the FBI and kept away from managing Malcolm X’s Audubon Ballroom door security on February 21, 1965.”

“These exonerations are an important step towards learning the truth about the assassination of Malcolm X, but this step is not sufficient. We specifically call on authorities to conduct a full and thorough investigation into the deathbed confession written by former NYPD officer Raymond Wood. If the NYPD or FBI were involved in enabling the murder of Malcolm X, his family and the public have a right to know.”

“The injustice done to Mr. Aziz and Mr. Islam cannot be undone, but their exoneration is a welcome development–not only because it overturns the wrongful convictions of two innocent men, but because it takes a step closer to the truth about the assassination of Malcolm X. It is imperative now that an investigation into Raymond Wood’s allegations of NYPD and FBI involvement in the murder is completed. Officer Wood stated in his confession that he helped frame Mr. Islam in the murder. The information presented in that confession cannot be ignored.”

Mitchell and Nasher noted that earlier this year, CAIR and CAIR-New York sent a letter to the DOJ and NYPD Inspector Generals’ offices calling on them to investigate the claims made in Raymond Wood’s confession.

The NYPD Inspector General responded by stating that:

“The Office of the Inspector General for the NYPD (OIG-NYPD) takes your concerns very seriously. However, due to the ongoing investigation currently being conducted by the New York County District Attorney’s Office, we are declining to open an investigation at this time. This declination in no way reflects a determination on the merits of the allegations. While we will not be investigating these allegations at present, we will continue to monitor the New York County District Attorney’s Office’s investigation.”