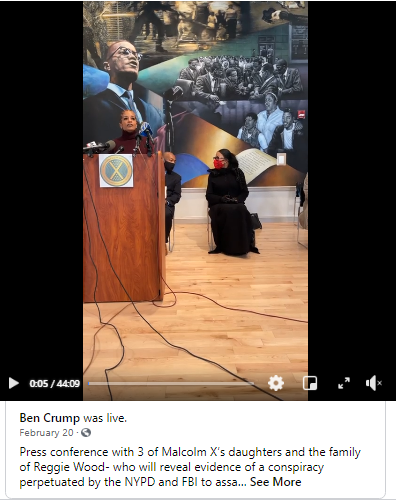 (WASHINGTON, D.C. – 4/13/2021) – The Council on American-Islamic Relations (CAIR) and its New York chapter (CAIR-NY) today announced that the civil rights organizations have sent letters asking the inspectors general of the U.S. Department of Justice and the New York Police Department to investigate a former NYPD police officer’s claim that  the NYPD and the FBI were involved in a conspiracy to enable the assassination of  African-American Muslim human rights leader El-Hajj Malik el-Shabazz (Malcolm X).

On February 20, 2021, one day before the 56th anniversary of Malcolm X’s assassination and martyrdom, three of his daughters joined attorney Benjamin Crump and other legal representatives to disclose a posthumous confession authored by Raymond A. Wood, an undercover NYPD Bureau of Special Services and Investigations (BOSSI) unit officer.

The confession stated in part: “It was my assignment to draw the two men into felonious federal crime, so that they could be arrested by the FBI and kept away from managing Malcolm X’s Audubon Ballroom door security on February 21, 1965.” Malcolm X was assassinated that day in the ballroom.

READ: Full Copy of Raymond A. Wood’s Letter Can Be Found Here

“Although we welcome the Manhattan District Attorney’s ongoing investigation into the assassination of Malcolm X, it is not enough. Both the New York Police Department and the FBI must take Officer Wood’s posthumous confession seriously by determining and explaining exactly what role their agencies played in Malcolm X’s assassination.”

“It is important to note that Malcolm X is just one of the many Black leaders who were targeted by law enforcement during and after the Civil Rights Movement. Although we do not yet know the full truth about the assassination of Malcolm X, we do know that the people responsible for his murder failed to silence his message, which has advanced racial justice, Black liberation, and Islam all around the world over the past 60 years.”

“The assassination of El-Hajj Malik al-Shabazz (Malcolm X) will forever live in infamy, but a serious and transparent investigation into the role law enforcement played in his murder will bring us one step closer to administering justice. Officer Wood’s statement sharing his personal knowledge and actions in effectuating a wrongful arrest, encouraging citizens to commit felonies, and intentionally drawing away Malcolm X’s security are too egregious to ignore. The investigative arms of the DOJ and NYPD have a responsibility to the citizens they serve to shed light on these allegations.”

Public interest in this death bed confession also continues to build. On March 26, two New York City mayoral candidates pledged their support for an investigation into the NYPD’s alleged involvement in the assassination of Malcolm X, while addressing members of the New York City Muslim community during the “NYC Mayoral Candidate Forum: Tackling Issues Impacting the Muslim Community.”

CAIR’s letters to the DOJ and NYPD inspector generals’ offices states in part:

“Officer Wood’s allegation that law enforcement agencies conspired to assassinate a Black Muslim human rights leader is incredibly concerning, but not particularly surprising to minority communities. During the Civil Rights Movement, Black activists like Fred Hampton were undermined, spied upon, and even assassinated by law enforcement officers in an attempt to derail movements for political freedom, racial equality, and social justice. . .

“This is truly a matter of restorative justice; Black lives matter, whether it is today or 56 years ago. African American and African American Muslim community leaders and activists have been spied on and persecuted by the U.S. government since the inception of the black liberation movement.

“Our communities are simply requesting that your office pursue the truth, starting with a full investigation into Officer Wood’s allegation that NYPD officers deliberately enabled the assassination of Malcolm X, and concealed the truth about his murder afterward.”

CAIR is requesting at the conclusion of their investigations the DOJ and NYPD inspector generals’ offices provide separate public reports with their findings, regardless of whether any potential suspects in the assassination are alive or dead.