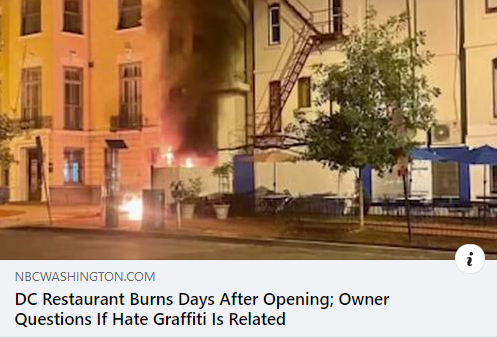 (WASHINGTON D.C., 8/10/2021) – The Council on American-Islamic Relations (CAIR), the nation’s largest Muslim civil rights and advocacy organization, today called for an investigation into a possible bias motive for a fire at a Washington, D.C., Turkish restaurant that was previously targeted with hate graffiti, and is seeking security camera footage from nearby buildings.

The fire started sometime after 4 a.m. last Wednesday. It appeared to have damaged only the exterior of the restaurant, possibly indicating it started outside. Fire officials say the cause of the fire is still undetermined and is under investigation. While the restaurant was under construction in June, it was twice targeted with graffiti saying “F*** Turkey” and depicting a Nazi swastika.

The owner provided law enforcement with a picture of one of the graffiti messages he found on a sign outside the restaurant on June 14.

“The hate vandalism that came before this fire began is enough to investigate with a possible bias motive in mind. We urge law enforcement authorities to examine all security camera video from nearby buildings. This incident must be treated with the seriousness it deserves.”