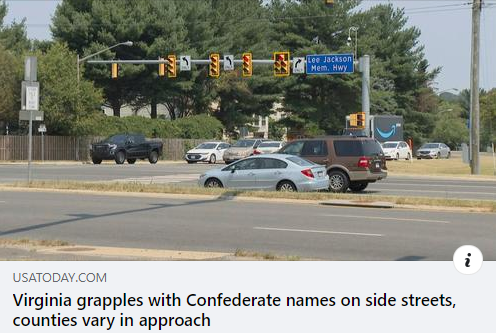 Throughout Virginia, symbols of the Confederacy are being removed from highways, schools and courthouses, many side streets are still named after Confederate figures.

In northern Virginia, a county commission identified scores of streets named for members of the Confederacy, often obscure and forgotten, including streets named Lawton, Bullock and Van Dorn. There is now an effort to remove those names in Fairfax and Loudoun counties.

SEE: Virginia contends with Confederate names on side streets

“Just as names honoring the traitorous Confederacy were put in place to promote white supremacy, they must be replaced with names honoring diversity and respect for the dignity and rights of others,” said CAIR National Communications Director Ibrahim Hooper. “We support the removal of all names or symbols of enduring systemic anti-Black racism from public spaces.”

In Colorado, a video taken during Sunday’s game between the Colorado Rockies and Miami Marlins at Denver’s Coors Field, a fan could be heard shouting the N-word while Marlins player Lewis Brinson, who is Black, was at bat. A statement by the Colorado Rockies said the team was “disgusted at the racial slur by a fan directed at the Marlins’ Lewis Brinson.” The Rockies said the fan has not yet been identified and an investigation is taking place.

“We condemn this disturbing incident of racist hate and urge a swift and thorough investigation followed by appropriate actions based on the results of that investigation,” said CAIR-Colorado Acting Board Chair Krista Cole. “All of our nation’s institutions must challenge systemic racism and bigotry.”