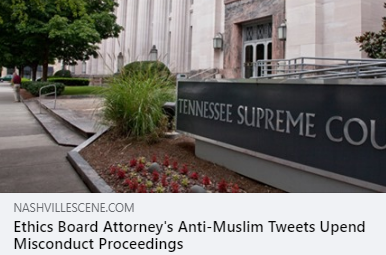 (WASHINGTON, D.C., 12/10/2020) – The Council on American-Islamic Relations (CAIR), the nation’s largest Muslim civil rights and advocacy organization, today called for an independent investigation of alleged anti-Muslim posts by a staff attorney for the Tennessee Board of Professional Responsibility (BPR), which is an ethics watchdog for that state’s attorneys.

In 2015, when then candidate Donald Trump called for banning Muslims from entering the United States, “Jerry Morgan” posted a question on Twitter stating: “Where’s the evidence that ‘Islam is a religion of peace?’” “They’ve gone to war against every society they’ve encountered for 1000s of years.” In a later tweet, Morgan wrote: “Muslims will take everything we give them and us [sic] it against us. Time to wake up!”

A motion has been filed in court seeking to disqualify Morgan as counsel on a case “for being an anti-Muslim bigot.”

“We urge the Tennessee Board of Professional Responsibility to conduct an independent and transparent investigation of the allegations of anti-Muslim bigotry expressed by a member of its staff,” said CAIR National Communications Director Ibrahim Hooper. “An ethics watchdog must itself be free of bias and bigotry.”