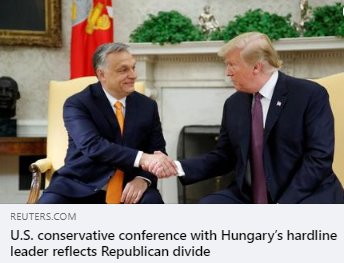 Other extremist figures speaking at the vent include Eduardo Bolsonaro, the Brazilian president’s son, and Santiago Abascal, leader of Spain’s far-right Vox party. Orban is the event’s keynote speaker. CPAC Hungary is scheduled for May 18-20.

“We urge any Americans who do not wish to be associated with authoritarianism, racism or Putin’s war on Ukraine to boycott this CPAC event in Hungary. It makes no sense for an American political organization to hold an event in a foreign country with speakers who promote fascism, racism and bigotry, including Islamophobia and antisemitism.”

McCaw noted Orban’s anti-immigration policies aimed at Muslim migrants, his attempts to undermine both the free press and democratic governance, his political supporters’ antisemitic attacks on George Soros, and that CAIR has in the past expressed concerns about an anti-Muslim speaker at a CPAC event.

He said Spain’s Vox has called for the deportation of Muslims from that nation and the party’s leader demanded a Reconquista, referencing an expulsion of Muslim immigrants from the country.