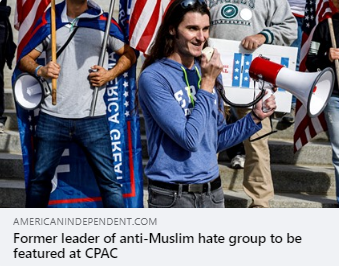 SEE: Former Leader of Anti-Muslim Hate Group to be Featured at CPAC

Presler was a former organizer with ACT for America – an organization described by the Southern Poverty Law Center as the largest anti-Muslim group in America. Brigette Gabriel, the founder of ACT for America, claimed that a Muslim “cannot be loyal to the United States” and that “Islam is the real enemy.” The group is also known for spewing anti-Muslim conspiracy theories, including Muslims are “infiltrating” American institutions to impose Sharia law.

In June 2018, CAIR called on Fox News to pull representatives from anti-Muslim hate conference hosted by ACT for America.

While working at ACT for America, Presler was responsible for organizing the group’s anti-Muslim “March Against Sharia” events. In June 2017, NPR reported that the marches attracted far-right sympathizers including those who decorate their posts with confederate flags. Billy Roper, a prominent white supremacist, and Neo-Nazi discussed the rallies on his podcast stating, “We want to send a message to Muslims that they are not welcome in our communities.”

Presler was reportedly present during the January 6 insurrection at the Capitol and described it as the “largest civil rights protest in American history.” He now works for the Republican Party of Virginia and independently to promote Donald Trump. In 2019, Presler was suspended from Twitter after writing “Black lives murdered by criminal illegal aliens don’t matter.”

“CPAC organizers should immediately drop anti-Muslim activist Scott Presler, who has actively worked to promote conspiracy theories about American Muslims and Islam,” said CAIR Director of Government Affairs Department Robert S. McCaw. “Presler’s reported role in supporting the January 6 insurrection is enough to disqualify him from being offered a credible speaking platform. Refusal to remove him from the speakers list will send a message to the American people that CPAC endorses his reprehensible views.”

He noted that there are many other problematic speakers at CPAC, including former President Donald Trump, Donald Trump Jr., Sen. Josh Hawley and Sen. Ted Cruz, all of whom played a major role in inspiring the January 6 insurrection.