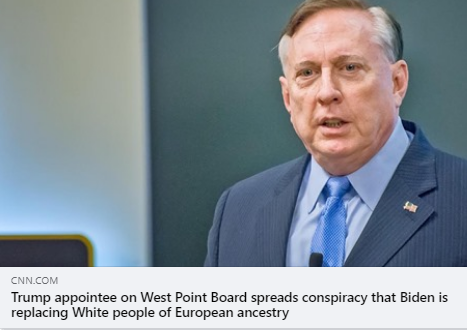 (WASHINGTON, D.C., 6/1/21) – The Council on American-Islamic Relations (CAIR), the nation’s largest Muslim civil rights and advocacy organization, today called for the removal of a West Point advisory board member who has repeatedly spread racist and Islamophobic conspiracy theories.

Army Col. Douglas Macgregor, a Trump appointee to West Point’s Board of Visitors, has promoted the racist “great replacement” conspiracy theory, supported using deadly force against undocumented migrants and spoke out against European countries welcoming “Muslim invaders.” His nomination to be ambassador to Germany failed because of these and other bigoted statements. A Biden administration official said Macgregor’s standing on that board is being reviewed.

CAIR previously called on members of the U.S. Senate Committee on Foreign Relations to oppose Macgregor’s nomination to be U.S. Ambassador to Germany.

“I think they’ve got control of it,” when asked about the situation on the US-Mexico border. “There’s no question about it. But their idea of control is to bring in as many people as they possibly can, as quickly as possible, from anywhere in the world, frankly. But preferably from Latin America, the Middle East, Africa and some, some portions of Asia, but not many.”

“The idea is that they have to bring in as many non-Europeans as possible in order to outnumber the numbers of Americans of European ancestry who live in the United States. That’s what it’s all about. And I don’t think there’s any point in questioning it. That is the policy. … It is a deliberate policy to enact demographic change.”

Enter your email to sign up for CNN’s The Point with Chris Cillizza.

“Anyone who promotes racist, xenophobic and Islamophobic conspiracy theories should not be in a position to influence our nation’s military, which is already dealing with the infiltration of white supremacist views in its ranks,” said CAIR Government Affairs Director Robert McCaw. “We urge President Biden to immediately act to remove ColonelMacgregor from West Point’s Board of Visitors.”

In 2016, Macgregor said on an internet radio show that Muslim refugees are “not coming to assimilate and become part of Europe” but come “with the goal of eventually turning Europe into an Islamic State” adding “That’s a bad thing for the West. It’s a bad thing for Europeans.”

In 2015, Macgregor similarly said on ABC News that Muslim refugees in Europe “are not coming to assimilate or become Europeans – quite the opposite. They’re coming to take over whatever they can get.”

On that same program, Macgregor also stated the United States has “more than 9 million Muslims” and “I would be surprised if some were not inspired by the Islamic State.”