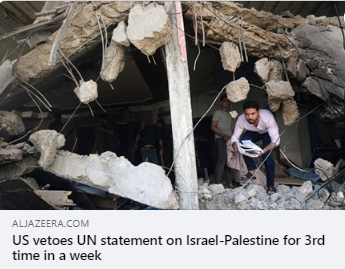 (WASHINGTON, D.C., 5/17/21) – The Council on American-Islamic Relations (CAIR), the nation’s largest Muslim civil rights and advocacy organization, today called on the Biden administration to stop blocking statements from the United Nations Security Council that would criticize Israel’s brutal military actions against Palestinians in Gaza and demand an immediate ceasefire.

Yesterday, the UN Security Council conducted its third emergency meeting in a week to put an end to the deadly Israeli offensive in Gaza. The joint statement was blocked for the third time by the United States, leaving no concrete outcome to Israel’s bombing campaign in Gaza.

Some 200 people, including 58 children, have been killed by Israel’s bombardment of the Gaza strip, which is described as the world’s largest open-air prison.

SEE: Israel-Palestine: US Blocks UN Statement for Third Time in a Week

“Our nation must live up to its stated ideals by calling for an immediate ceasefire and end to attacks targeting civilians,” said CAIR National Executive Director Nihad Awad. “Israel must end its brutal treatment of the Palestinian people and eliminate its system of racial and religious apartheid, which has always been the cause of the ongoing conflict. Peace without justice is always temporary. Only justice and dignity for everyone, regardless of race, faith or ethnicity, will result in a lasting peace.”

On Sunday, CAIR joined an initiative led by American Muslims for Palestine (AMP) to boycott the White House Eid Celebration in response to the Biden administration’s defense of Israeli attacks on Palestinians and Israel’s planned ethnic cleansing in Sheikh Jarrah in occupied East Jerusalem.

The Biden administration has refused to criticize the Israeli government for sparking this cycle of violence by attempting to expel families from their homes in Sheikh Jarrah and attacking Palestinian worshippers in Masjid Al-Aqsa.

Over the weekend, thousands of people took to the streets in cities across the world to show their solidarity and support for the Palestinians as Israel continued its bloody bombardment in the Gaza strip.

SEE: Thousands Take Part in Pro-Palestinian Protests in Cities Across the World

On Saturday, an Israeli air raid flattened a high rise building that housed the offices of the Associated Press and Al Jazeera sending shockwaves to the journalism community.

An increasing number of Democratic members of Congress have called upon President Biden to more assertively confront the Israeli government’s violation of Palestinian human rights.