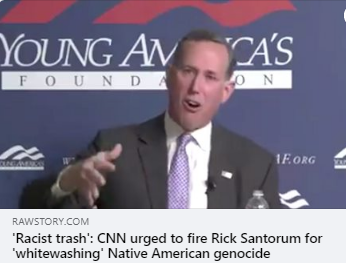 (WASHINGTON, D.C, 4/26/2021) – The Council on American-Islamic Relations (CAIR), the nation’s largest Muslim civil rights and advocacy organization, today called on CNN to drop former senator Rick Santorum as a commentator after he made comments whitewashing the genocide of Native Americans and denigrating their contributions to American culture.

“CNN should never again invite Rick Santorum as a commentator after he attempted to whitewash the European genocide of this continent’s indigenous population and to dismiss the significance of Native America culture. We strongly support free speech — even by apparent white supremacists like Mr. Santorum — but freedom of speech does not guarantee a legitimizing platform on a mainstream media outlet.”

He noted that just yesterday, CAIR supported an event in Virginia to protest the desecration of an historic Native American and African American cemetery and recommended that Santorum read the book “Indian Givers: How the Indians of the Americas Transformed the World.”

Awad said the American Muslim community and CAIR are standing in solidarity with all those challenging anti-Black racism, xenophobia, Islamophobia, anti-Semitism, white supremacy, and all other forms of bigotry.