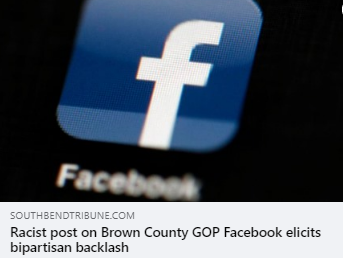 (WASHINGTON, D.C., 5/1/2021) – The Council on American-Islamic Relations (CAIR), the nation’s largest Muslim civil rights and advocacy organization, today called on the Indiana Republican Party to apologize for a racist post on the official Facebook page of the Brown County (IN) Republican Party.

That post, which has since been taken down, included white supremacist and racist tropes, including claiming that Black people come from “jungles,” have “virtually no intellectual achievements” and are incompatible with white people’s “majestic civilization.” When contacted by the media, Brown County Republican Party Chairman Mark Bowman the post was not a statement from the Republican Party, even though it was posted on the party’s page.

He said the American Muslim community and CAIR are standing in solidarity with all those challenging systemic anti-Black racism, xenophobia, Islamophobia, anti-Semitism, white supremacy, and all other forms of bigotry.