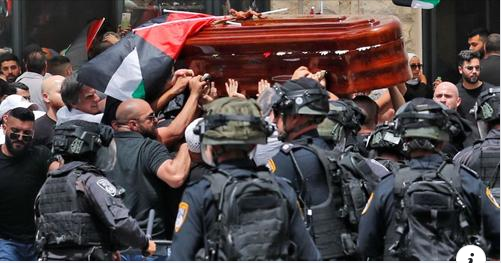 (WASHINGTON D.C., 5/13/2022) – The Council on American-Islamic Relations (CAIR), the nation’s largest Muslim civil rights and advocacy organization, today called on President Biden to condemn attacks by Israeli forces on mourners and pallbearers at the funeral of Palestinian-American journalist Shireen Abu Akleh, who was shot and killed by an Israeli sniper earlier this week.

Abu Akleh, an American citizen and a reporter for Al Jazeera, was shot and killed by an Israeli sniper while covering an Israeli attack on the occupied West Bank town of Jenin early Wednesday. Her funeral took place a day after a memorial procession that brought thousands to the city of Ramallah.

A flash bomb and tear gas were fired at mourners who carried Abu Akleh’s coffin out of the hospital. Israeli police beat mourners with batons as they struggled to carry her coffin.

“Even in death, Israeli apartheid forces do not respect Palestinian human rights. The Israeli government will continue to act with impunity as long as our nation and the international community assist in perpetuating the racist occupation and oppression of the Palestinian people.

“We call on President Biden to strongly condemn the abuse of those who mourned for assassinated Palestinian-American journalist Shireen Abu Akleh. We also again call on the FBI to lead an investigation of her assassination. Apartheid Israel targeted her and cannot be trusted to investigate itself when it comes to its abuses of Palestinian-Americans.”

Awad noted that earlier this week, CAIR called on President Biden to condemn Abu Akhleh’s assassination and to withhold aid from Israel following the announcement of plans to build some 4,000 new racially-segregated housing units on occupied Palestinian land.