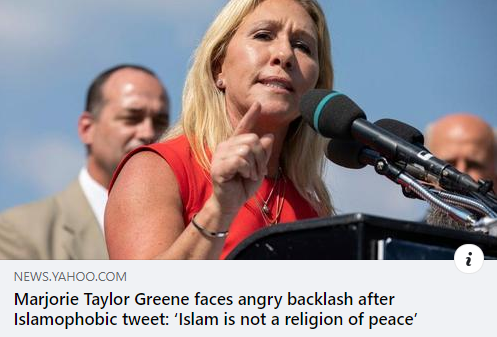 “Republican Leader McCarthy should swiftly rebuke Marjorie Taylor Greene for her latest attack on Islam and make clear that House Republicans will no longer tolerate her cancerous bigotry, including a history of racist and anti-Semitic remarks.

“Republican leadership should prioritize making their party a welcoming place for all Americans – not a party for bigots who insult the faith of our nation’s eight million Muslims.”

In May, CAIR called out Rep. Marjorie Taylor Greene for posting anti-Muslim tweets about Ilhan Omar referring to the ongoing Israeli bombardment in Gaza.

In response to a tweet from Rep. Omar stating “Palestinian lives matter. Pass it On,” Rep. Greene replied “Jewish lives matter. So tell your terrorist buddies in Hamas to stop bombing them. #JihadSquad.”

In March, CAIR and CAIR-Georgia renewed their call to expel Greene from Congress over her racist comments targeting a Muslim woman.

Earlier this year, CAIR called for her expulsion over violent and threatening remarks she reportedly made online over a multi-year period.

A CNN KFile review of hundreds of posts and comments from Taylor’s Facebook revealed that she repeatedly expressed support for executing prominent Democratic politicians in 2018 and 2019. Taylor also has a track record of endorsing QAnon conspiracy theories and making anti-Semitic and Islamophobic statements.

In a Facebook post from January 2019, Greene liked a comment that said “a bullet to the head would be quicker” to remove Speaker Nancy Pelosi. Moreover, she liked comments about executing FBI agents who, in her perspective, were part of the “deep state” working against Trump.