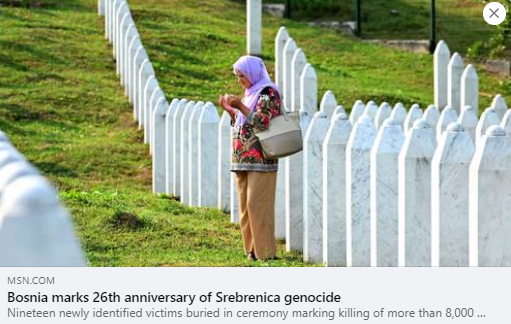 In 1995, Bosnian Serb forces captured the town of Srebrenica, a designated U.N Safe Area in eastern Bosnia. As Dutch U.N. peacekeepers passively looked on, the Serbs killed more than 8,000 Muslim Bosniak men and boys and buried them in mass graves. Bodies are still being found around the area, and collective burials of newly discovered victims are held annually on July 11.

“The Srebrenica genocide was a moment in which the world failed to find its conscience. We mourn the thousands of innocent lives lost to religious and ethnic hatred and the international community’s indifference to those deaths. We pray that God enters those killed into the highest paradise and grants their families solace.

“The indifference that allowed Srebrenica to happen is now allowing the Chinese government to commit a genocide against Uyghur Muslims. As we mark the anniversary of the Srebrenica genocide, we must consider its lessons.

“We must raise our voices and take action to save the Uyghurs and to call those indifferent to ongoing human rights abuses worldwide to account. To those resting now at Srebrenica’s graveyards, we owe our action and dedication to fighting crimes against humanity.”

Awad noted that last month, CAIR welcomed the conviction of Ratko Mladic, the perpetrator of the Srebrenica genocide.