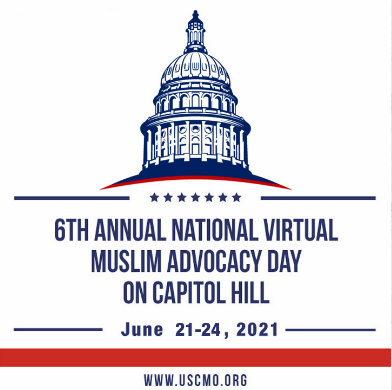 (WASHINGTON, D.C., 5/25/21) – The U.S. Council of Muslim Organizations (USCMO) is inviting members of the American Muslim community to register for its 6th annual National Muslim Advocacy Day on Capitol Hill – this year taking place virtually – on June 21 – 24 (Monday through Thursday).

Muslim delegates and activists will discuss the most pressing issues affecting American Muslims in today’s climate with congressional offices, including:

All representatives for national, state, and local Muslim organizations and communities are encouraged to register for this several-day advocacy event. Monday, June 21 will be reserved for virtual trainings on policy and advocacy. Congressional meetings will take place Tuesday, June 22 through Thursday, June 24.

USCMO is encouraging participants to register at least one month before the event and no later than Sunday, June 13. #MuslimHillDay

[Note: The advocacy day had previously been scheduled to take place the prior week but is being pushed back one week to provide additional time for USCMO to support the human rights of Palestinians.]

“It is vitally important that American Muslims maintain and even expand their political engagement at a time when critically-important issues are being debated and policy decisions are being made that impact all Americans,” said USCMO Secretary-General Oussama Jammal.

“We are excited to announce the resumption of National Muslim Advocacy Day on Capitol Hill, in a virtual format that is accessible to nearly every American Muslim across the nation,” said USCMO National Muslim Advocacy Day Steering Committee Chair Robert S. McCaw. “American Muslims are a force for positive change in the halls of Congress and in local and state governments. Our goal is to ensure American Muslims continue to forge stronger relations with their elected representatives and have their voices heard.”

For those who would like additional advocacy techniques and a more in-depth rundown on the advocacy day’s focused issues, there will be a series of online training seminars for those registered before the event.

Last year’s Muslim Advocacy Day on Capitol Hill was postponed due to the outbreak of COVID-19 and USCMO prioritizing the health and safety of the more than 500 delegates who annually travel from 25 states participate in the event.

Because USCMO’s greatest concern remains minimizing the spread of COVID-19, this year’s Muslim Advocacy Day on Capitol Hill will take place virtually, with delegates joining pre-scheduled meetings with members of Congress and their staff via video conferencing. A second in-person advocacy day may be scheduled later this fall if conditions permit.

For more information about the event or how your Muslim organization or community can participate, please contact the USCMO at: advocacy@uscmo.org.

You can also find more information on the history of the event and view videos from previous years at: http://uscmo.org/index.php/portfolio-items/uscmos-annual-national-muslim-advocacy-day-on-capitol-hill-2/