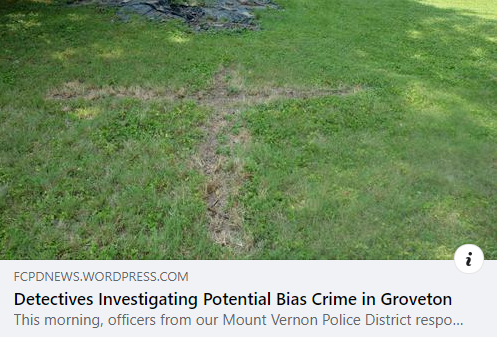 On Tuesday, Fairfax County police officers responded to a report of the shape of a cross burned into grass on a resident’s lawn. Police have launched an investigation into a possible bias motive.

In a statement, the police department said “any form of hate is unwelcome” in the county, and that their goal is to “ensure we document any Bias Crime or Bias Incident, conduct a thorough investigation, and provide the necessary support and resources available to all impacted.

“This apparent act of racist hate and intimidation must be taken seriously and the perpetrator brought to justice,” said CAIR National Communications Director Ibrahim Hooper. “There must be no room in our society for the anti-Black racism and white supremacy that cross burnings have historically represented.”

He noted that cross burning is a practice associated with the racist Ku Klux Klan (KKK).

Video: CAIR Calls on DHS to Release Quran Tiles for Va. Mosque That are Threatened with Destruction