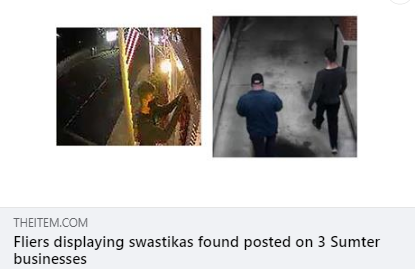 The Sumter Police Department in Sumter, S.C., is investigating flyers displaying a Nazi swastika found on three businesses in the city on Monday.

“With the empowerment and mainstreaming of hate promoted at the highest level of our society, it is incumbent on all Americans to speak out against anti-Semitism and all other forms of bigotry,” said CAIR National Communications Director Ibrahim Hooper.

CAIR also welcomed the voter approval of a new state flag in Mississippi that replaces a Confederate-themed one state lawmakers retired months ago.

Mississippi approves flag with magnolia, ‘In God We Trust’ to replace Confederate-themed flag