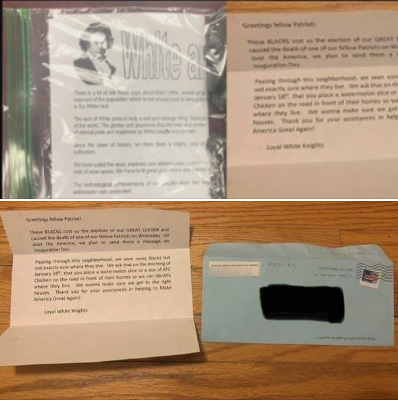 The racist messages are circulating in the Richmond-Metro area. Police say a letter mailed to a resident was signed by the Loyal White Knights, a white supremacist group affiliated with the Ku Klux Klan. It stated: “Greetings fellow Patriot! These BLACKS cost us the election of our GREAT LEADER’. . .All over the America, we plan to send them a message on Inauguration Day.”

“White supremacy is a scourge that must be confronted by Americans of all faiths and backgrounds if we are to move forward as a just nation,” said CAIR National Communications Director Ibrahim Hooper. “We ask Virginia leaders across the political spectrum to condemn this hate campaign targeting the African-American community and all those who seek justice and equality.”

He noted that last week, CAIR supported the removal of a Confederate monument in front of the Botetourt County courthouse in Fincastle, Va.