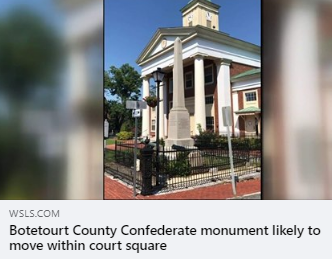 (WASHINGTON, D.C., 1/11/2021) – The Council on American-Islamic Relations (CAIR), the nation’s largest Muslim civil liberties and advocacy organization, today supported the removal of a Confederate monument in front of the Botetourt County courthouse in Fincastle, Va.

This month, Botetourt County supervisors will be presented with a proposal to remove the Confederate monument, which honors the 12 Botetourt companies that fought for the Confederacy and refers to the “dark Reconstruction years.” The courthouse is due for renovation over the next several years.

“We urge county officials to remove this symbol of slavery and white supremacy from the grounds of an institution that must treat all citizens with justice and equality,” said CAIR National Communications Director Ibrahim Hooper. “The continued presence of a monument honoring traitors and racists send a message that public officials approve of bigotry and discrimination.”