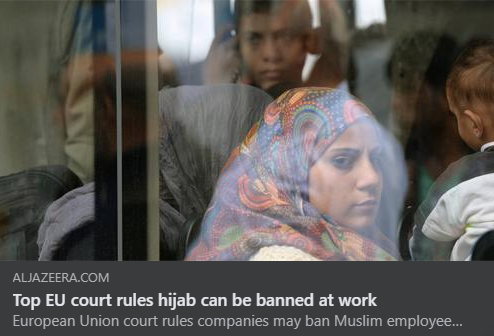 On Thursday, the Luxembourg-based ECJ ruled on cases brought by two Muslim women in Germany who were suspended from their jobs after they started wearing a hijab. The women were told by their respective employers that they were not allowed to wear Islamic attire, and were at different times suspended and told not to come to work wearing them.

The ECJ ruled that employers may prohibit the wearing of visible “political, philosophical, or religious” symbols if they need to present a “neutral image towards customers or to prevent social disputes.”

Hijab bans have been a source of controversy in Germany, whose 5 million Muslims make up the largest religious minority in the country. France, which has the largest Muslim population in Europe, banned the wearing of hijabs in state schools in 2004, and in 2014 a French court upheld the dismissal of a Muslim daycare worker for wearing a hijab at a private nursery with strict neutrality regulations.

“The freedom to practice one’s faith, including by wearing a hijab in the workplace, is a fundamental human right. Today’s decision by this European court infringes on the religious liberty of European Muslims and represents the latest example in a disturbing pattern of global Islamophobia. We stand in solidarity with the European Muslim community as they work to address this unjust, irrational and bigoted ruling.”

He said CAIR offers a booklet, called “An Employer’s Guide to Islamic Religious Practices,” to help employers gain a better understanding of Islam and Muslims in the workplace.

Awad noted that CAIR has repeatedly opposed bans on hijabs and other religious symbols.