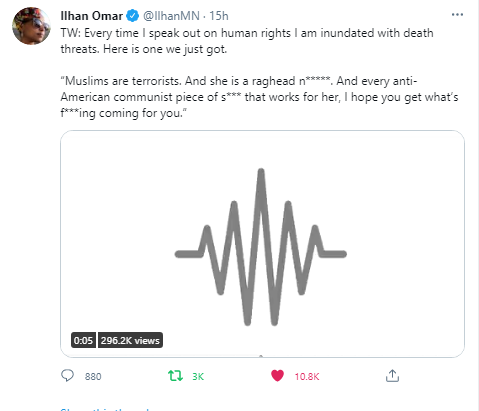 (WASHINGTON, DC – 6/10/2021) — The Council on American-Islamic Relations (CAIR), the nation’s largest Muslim civil rights and advocacy organization, today strongly condemned a dozen House Democrats for joining far-right voices in smearing Rep. Ilhan Omar after she criticized human rights violations that our government and other actors have committed in the Middle East.

CAIR also condemned a surge in death threats against the Minnesota congresswoman, and called on Capitol Police to ensure it is doing everything possible to protect her from extremist actors.

“We strongly condemn the latest death threats against Rep. Ilhan Omar, as well as the latest disingenuous and dangerous smear campaign against her.

“Although we expect far-right, Islamophobic voices to target Rep. Omar for speaking up on human rights, it is shameful for her own colleagues in the House to join them in doing so.

“Rep. Omar stated an indisputable fact: various actors in the Middle East, including our own government, have committed atrocities and should face accountability for their conduct in the appropriate international forums. There is nothing ‘prejudiced’ about this observation.

“This obsession with misconstruing Rep. Omar’s words and smearing her has little to do with what she says and more to do with who she is: an outspoken Black, visibly Muslim woman who vocally condemns human rights violations, regardless of the perpetrator.

“Enough is enough. House Democrats should stop endangering Ilhan Omar for telling the truth and start demanding justice for all people.”

Instead, House Speaker Nancy Pelosi and Majority Leader Steny Hoyer lightly criticized the ads while reiterating support of Israel. In Rep. Hoyer’s case, he went so far as to provide AIPAC strategic advice on “making the case to the American people” on behalf of Israel.

AIPAC’s paid advertisement on Facebook displays an image of Omar with rockets raining down on Israel in the background. The image falsely claims that Omar said that when Israel targets Hamas, it’s an “act of terrorism.”

Omar actually stated that Israeli airstrikes killing civilians in Gaza is an act of terrorism and that Palestinians deserve protection.